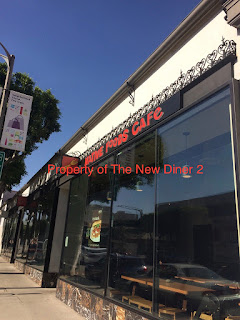 Native Foods Cafe came onto the scene for vegan and vegetarians like Haley's Comet.  Now you see them, now you don't.  They had locations in Culver City and Santa Monica, but they closed in early 2016.  The only Los Angeles location is in Westwood!  I went to the Santa Monica location in 2015.  Thought the food was pretty good.  Figured I would do a review and went to their Westwood location.

Located in the very busy Westwood Village,  Native Foods Cafe, occupies a medium sized space.  The line starts to your left as you enter the restaurant.  There are dining tables in front and even a couple tables in the upstairs loft-like area. Nothing fancy about the decor.  But, the tables were dirty and a couple tables still hadn't been cleared of plates, even though nobody was at the table for the entire time I was there, roughly 30 minutes. 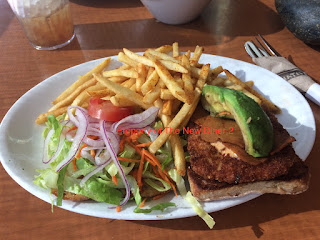 When I went to their Santa Monica location, I had their Soul Bowl- which is a vegan version of soul food- fried chicken with rice, black beans and cornbread!  The native chicken was delicious!  Full of flavor and it actually tasted just like chicken!   I figured I would try something else and got the native chicken, bacon and avocado club.  This was only ok.  The bottom part of the sandwich with the chicken, was hot as hell!  The chicken was ok, a bit tough.  The sandwich could use a bit more chipotle sauce, kinda of dry.  The avocado wasn't the freshest!  The fries were good.

Service was good.  The young lady who helped me was nice and helpful.  But, as I mentioned earlier, there were a couple tables that weren't cleared off the entire time I was there.  The tables had dirty dishes when I walked in and still hadn't been cleared when I left.  The table I saw sitting at first, needed to be wiped down, there were crumbs on the table!  There were plenty of workers behind the counter just talking.  It was a slow time for the restaurant.  They could have gotten somebody to wipe down and clear the tables!

I can see why Native Foods Cafe didn't get a hold of the very strong vegan/vegetarian market in Los Angeles.  Places like Veggie Grill, serve up better food and their restaurants are cleaner!  No reason to come back to Native Foods Cafe.
Posted by Johnny Diner at 7:48 PM