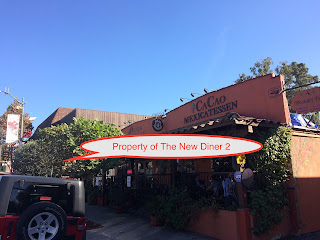 CaCao Mexicatessen has been on my bucketlist of places to try for about three years.  Even though I frequently go by the area, I still haven't stopped in.  That changed on a raining day in Los Angeles!  CaCao is a casual restaurant, with counter service.  It's fairly small with limited seating on one side of the restaurant, with a large bar and booth seating on the other side of the restaurant.  There is very limited parking, street parking that is usually taken by shoppers of the Trader's Joe next door. It's not far from the now closed Larkin's, an overpriced soul food restaurant! 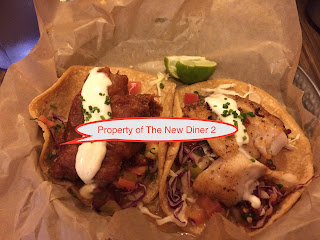 The fried version has a Alesmith Nut Brown beer-batter.  This was very crispy and flaky!  Everything was fresh and full of flavor.

The pan seared is also very fresh and full of flavor.

Service- you order at the counter and they bring the food to your table.  Nice, friendly and helpful. 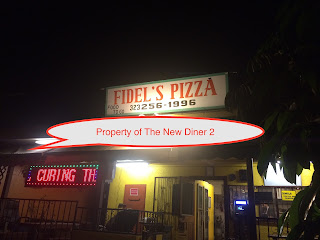 Fidel's Pizza has been serving pizza in Highland Park since 1977.  So, they must be doing something right or there isn't much competition in the area.  Much like Italiano's Pizza, Fidel's is a restaurant built into a house.  There are a few tables in front, but mostly a take out restaurant. 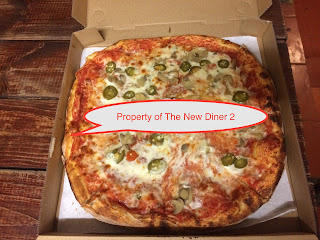 Medium mushrooms and jalapeno pizza, $14.  The crust was good, slightly thicker than thin crust, but held up well to the toppings.  But, the toppings were a disappointment.  The mushrooms are canned!  Big no, no!  The jalapenos were fresh, but they were very stingy with the amount of jalapenos and canned mushrooms.  Jalapenos are relatively cheap, maybe $1/lb, and they maybe put one medium sized jalapeno on the pizza?  The sauce is heavy on the oregano and is about average.  Not impressed with the pizza, because you don't use canned mushrooms!

I won't go back to Fidel's Pizza, again.  There are too many other options in Highland Park, like Town Pizza, even Italiano's Pizza is better!
Posted by Johnny Diner at 8:25 AM 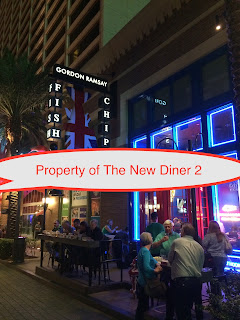 I don't care enough about "celebrity chefs" to google them, so I had no idea that Gordon Ramsey owned so many restaurants throughout the world.  I thought he was the yelling host of Kitchen Nightmares.  I went to one restaurant, The Capri, that was featured on the show.   It wasn't good, but I don't blame Ramsey for that.  It's the owner of the restaurant, who are responsible for holding the standards Ramsey sets!  The recurring theme of Kitchen Nightmares is using fresh food, not frozen, pre-made food, well trained staff, and cleanliness of the restaurant.  So, when I heard that Ramsey opened a fish and chips restaurant on the Las Vegas Strip, I dropped in on a recent trip to Vegas.

Located in The Linq Promenade shopping area.  It has a very tacky exterior with a huge fish design, in the colors of the British flag, hanging from the front,.  I get we're in Vegas but the design is over the top.  It's basically a to-go place, with limited seating that is consists of tables and some counter spaces.

It was crowded the night I went, but the line moved quickly. 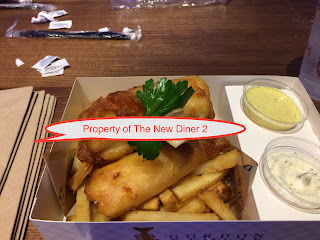 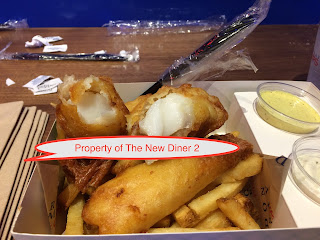 Fish and Chips combo, $16.21, with tartar sauce and mango curry sauce, with soda.  Fish was fresh cod. This was very good.  There wasn't much batter on the fish, most of the weight of the fish is from the fresh cod!  The fish was fried perfectly, light outside, flaky goodness inside.  You can really tell the difference between fresh fish and frozen!  The fries were on the warm side, but very good. Soft on the inside, crispy on the outside.

My only complaint is that they force you to buy a soda!  The soda is listed at $3.99 on the menu. I only drink water, and that's free!  This could be $3.99 cheaper, but I guess you're paying for the name and being on The Strip!

Service was very good.  Not only are the workers friendly, but fast and know their jobs.  When I asked the cashier what fish they used, he said cod.  Most people at restaurants do not know the menu and that's a reflection of management poorly training the workers.  That's not the case here.  They are properly trained and are friendly, non robotic people!

I would come back if I'm in Vegas again!
Posted by Johnny Diner at 8:21 AM 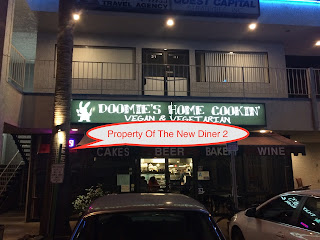 Two all beef patties, special sauce, lettuce, cheese, pickles, onions, on a sesame seed bun! Yes, that is the line to the Big Mac theme song.  I read that Doomie's Home Cookin' serves up a vegan Big Mac that tastes just like the real thing!  Now, it has been over 5 years since I had a Big Mac. I remember always having a headache after eating a Big Mac, maybe for the special sauce.

Anyways I figured I would try Doomie's.  I talked to two vegetarian friends; one liked Doomies and another doesn't like the concept of vegetarian restaurants trying make making vegetarians items taste like meat!  I'm much more to the center when it comes to vegetarian food.  While I loved the chicken wings at Bulan, I don't always seek out or order vegetarian meat items!

Doomie's is in a shopping center that has the address of Vine, but the store front is on Fountain!  The shopping center has an Eastern European restaurant, which are are in LA.  But, the restaurant had a C grade from the health department!  The best part of the shopping center is that they have free parking!  At least, it was free the Monday night I was there.  No valets or paid parking.  But, it is stacked parking, so make sure you don't get pull to the front parking space!  Doomie's is a good sized restaurant with about 15-20 tables.  It was busy the night I was there. 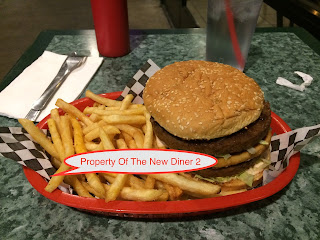 Vegetarian Big Mac, $14.50.  This is not on their regular menu.  Like In N Out Doomie's has a special menu, and you have to ask for it.  The vegetarian Big Mac was huge!  The patties were Quarter Pounder sized patties, not the small patties from McDonald's.  It had everything a regular Big Mac has-special sauce, lettuce, cheese, pickles, onions and a sesame seed bun!  Now the important thing- it tastes exactly like a Big Mac!  This version is filled with MSG, and it hit me right away.  I got a headache too!  This was good, but greasy and very heavy!  I think the $14.50 price tag is high too.

The fries were frozen, which is disappointing!  I expected home made fries!

Service is OK.  The server wasn't the most friendly and even though they were busy it took them awhile for them to take my order, and bring my water.

I may go back to Doomies, but I won't make a special trip.  Other menu items have a better price, but the vegetarian Big Mac is overpriced.
Posted by Johnny Diner at 11:00 AM