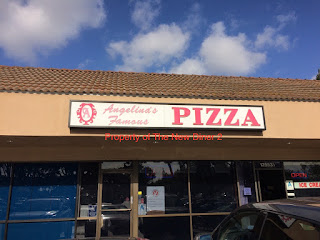 Angelina’s Famous Pizza  has been on my bucketlist of places to try since 2011.  So, I was near Norwalk and figured I should finally check this off my bucketlist.

Angelina’s Famous Pizza is a small restaurant with 4-6 tables in the front.  It was very busy when I was there, with many people calling in orders.  On their window is a sign that says they finished in 2nd place in 2014 at an International Pizza Competition, in the traditional category.  So a promising sign. 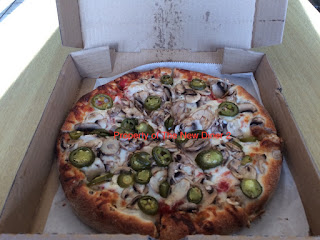 Small 2 topping pizza-mushrooms and jalapenos, $12.52 with tax.  The sauce was great!  Very well balance, nothing overpowering, and there was plenty of sauce on this pizza.  The toppings were fresh.  The crust was slightly too well done for my tastes.  If they had pulled the pizza from the oven a couple minutes earlier, this would be one great pizza.  It was still very good.  Now some people may complain about the high prices, but it is a good quality pizza.

I thought the pizza at Angelina’s Famous Pizza was very good and I would go back, and I would make a special trip for it. 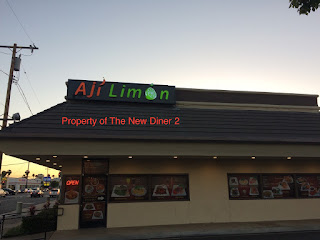 Aji Limon is a Peruvian restaurant in Buena Park.  Across Lincoln Ave. is China King, a fast Chinese restaurant I reviewed back in 2008, that is in the city of Anaheim!  Weird how city boundaries are set up!

I assume Ali Limon once housed a fast food restaurant.  Now, it is a very nice sit down restaurant that was pretty busy on a Saturday night. 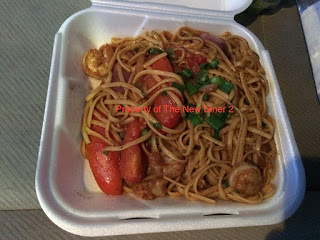 Tallarin Saltado de Camaron, $15.95, Spaghetti sauteed with shrimp, onions and tomatoes.  While this dish was very good, the spaghetti was cooked perfectly, there were a lot of shrimp that were a bit overcooked, and had a very nice flavor.  I just don't think it is worth the price.  You can get shrimp chow mein from a Chinese restaurant from anywhere from $9-$12.  Ok, most shrimp chow mein doesn't have tomatoes, but come on, this is overpriced!

Service, I got this dish to go, was good.  The guy who took my order was nice and helpful.  My order came quickly.

While there is nothing wrong with Aji Limon, you will get a very good meal, I just don't think it is worth the price! 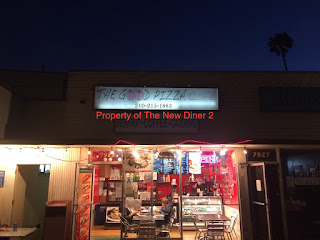 The Good Pizza has been on my list of places to try since 2010.  I was nearby The Good and decided to finally drop in.  Located in a very dark strip mall that has a liquor store, cleaners, beauty salon, and a dance studio and across the street from a Vons. The Good Pizza has two tables inside and about four more outside.  I'm guessing they do a lot of delivery and take out. 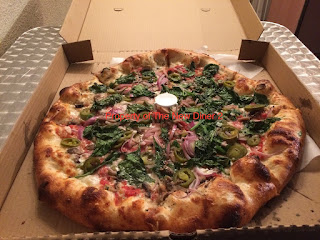 18in with 5 toppings of your choice minus some prime toppings like steak; $23.  I got jalapenos, mushrooms, red onions, and spinach.

The crust is awesome!  Very flavorful, great texture, soft yet chewy.  The cheese they use has a lot of moisture, so the pizza got a bit soggy.  The toppings were plentiful and fresh.  But, there wasn't that much sauce-which was pretty good, well balanced flavor.

Some people may complain about the high prices, but this is a larger pizza than most pizza places, and the quality is much better than any damn chain pizza, and blows some mom and pop pizza places away! 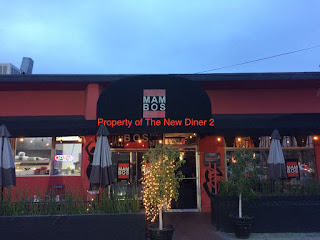 I first heard of Mambo’s Cafe on Diners, Drive-ins and Dives and it has been on my bucketlist of places to try since 2010.  Finally, I made it to Mambo's!

While their location is Glendale,  it's not the part of Glendale most people know.  It's on the order of Burbank and just south of the 5 freeway.  It has to be a former gas station in a former life, but a nice restaurant now.  A nice counter with about eight seats and a good sized dining room.  They have live jazz every Tuesday. 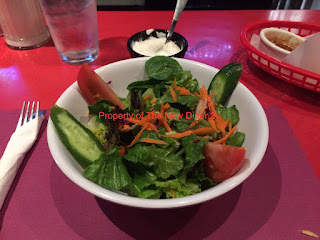 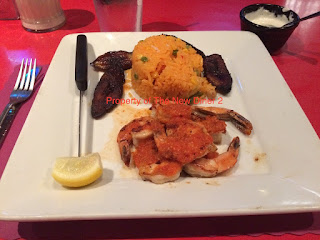 While this was a very good dish- the vegetable rice had onions, corn, peas, and cooked in a broth that made it very flavorful, the seven medium sized shrimp were well cooked and the garlic sauce had a nice flavor, the portion size is terrible!  I mean even when ordering shrimp fried rice you get about a dozen shrimp and most places it's around $10.  Yes, I know I am comparing a Chinese dish with a Cuban dish.  But, I could do the same with a Peruvian dish-shrimp with noodles.

Service is pretty good.  While they came around often, were friendly, they never once asked how everything was!!

I wouldn't go back to Mambo's Cafe.  While the food was good, the portion size and price do not make this a good value.