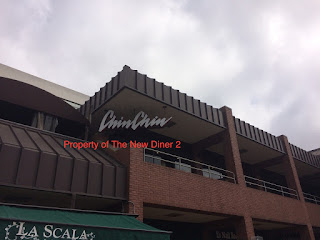 I went to Chin Chin about three years ago and really I don't recall how the food was, I just remember one hell of a boring date!  Anyways, I was in the snotty, Brentwood section of Los Angeles, and decided to give Chin Chin another try.

Chin Chin started in 1983 at this Brentwood location, and tried to franchise.  Not sure how many Chin Chin locations are franchised now, but they have locations in Beverly Hills, West Hollywood, Studio City, and Las Vegas.  I think Chin Chin is very much like PF Chang's- an upscale Americanized Chinese restaurant.  The Brentwood location is tastefully decorated in Chinese motif! Located on the second floor, it's an L shaped restaurant.  There are tables and booths on your left as your walk in.  Then a right turn leads to more tables.

The most interesting thing you notice about Chin Chin, is that there are no Chinese people working there!  The hostess was Latino.  My server was white.  Another server was African-American.  Yet another server was Latino!  I didn't go to the kitchen, but I'm betting the cooks are Latino! 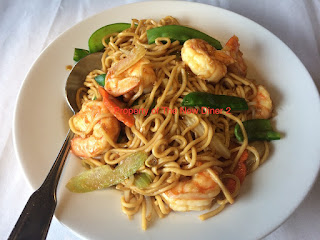 Vegetable chow mein, $13.95, with shrimp +$2, carrots, peas, and, celery. I was surprised at the high price for just vegetable chow mein, but I know it's snotty Brentwood and rent isn't cheap.  Chicken or beef can be added apparently for no charge.  I figured I might as well add shrimp.  That was the best $2 I've spent in a long time.  The noodles were cooked perfectly. There really weren't that many vegetables in this dish, but they were well cooked and seasoned.  But, without a doubt was the huge shrimp!  I couldn't seven and I know I ate at least three before I started counting.  So, for that $2, it was a damn steal!  The shrimp was also cooked perfectly and well seasoned.  I was impressed with this dish.  The high price tag was easier to take with the large amount of shrimp!  I would order this again!

I don't get to snotty Brentwood often, but I would go back to Chin Chin.  I may even try some of their other locations too!