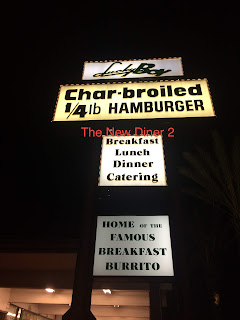 It's one of those greasy spoon type restaurants.  It's not really a diner, but then again it's not fast food.  There are some hidden gems in these types of restaurants.  Lucky Boy is cross the street from My Vegan. They have some outdoor seating on their covered patio.  There is the dining room inside.  You can order at the window outside or inside. 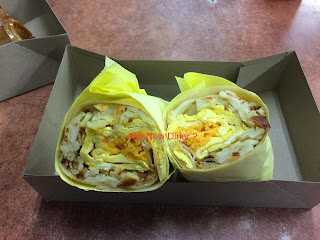 Breakfast burrito-hash browns, eggs, cheese and choice of ham, bacon, sausage or chorizo, $7.58.  There is a ton of unseasoned hash browns, eggs, and cheese.  I know most people order with meat, and a salty bacon or sausage, may make up for the lack of seasoning on the hashbrowns, but they need to add seasoning!!  A very bland dish.  Another thing, I got this within a few minutes of ordering.  But, it wasn't hot!  As if the ingredients were sitting in a warmer and put together.  Maybe, they are cooked to order during breakfast hours.

I wouldn't go back to Lucky Boy for their breakfast sandwiches.  Yes, the portion is huge, but very bland, and I doubt it was cooked to order.
Posted by Johnny Diner at 10:47 PM 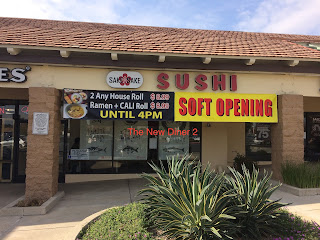 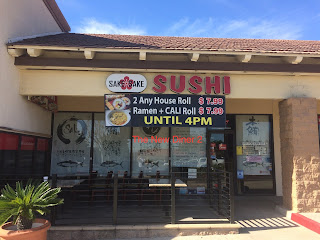 Why are there two pictures of Sake Sake Sushi?  The first picture is their current location, which opened up in early November, 2018.  The second picture was their original location, that was closed down so this shopping center, could get an Aldi grocery store.  The original location was right next to Michael's, and on the south side of CVS.  Now, they are on the north side of CVS.

This shopping center has many restaurants that I reviewed, the now closed China Gate, San Biagio's Pizza, and Handel's Ice Cream- where Wednesday nights are $1.35 scoops!! 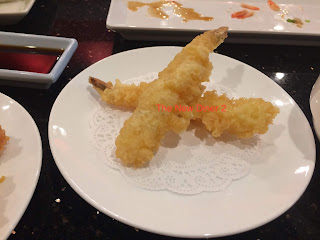 Shrimp tempura-Crunchy outside, but mushy inside, a frozen shrimp tempura that needed more time cooking. 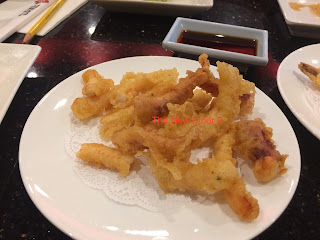 Calamari tempura- it seems they cooked this in two batches.  Some were burned or overcooked.  Others were cooked perfectly.  After eating one of the burned pieces, I stuck to the perfectly cooked pieces. 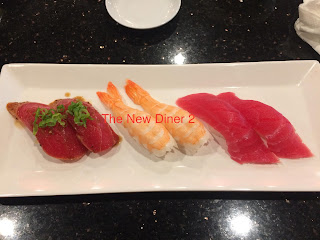 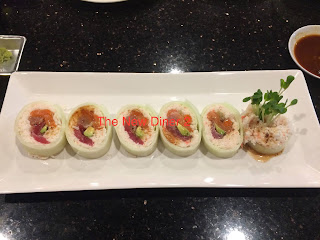 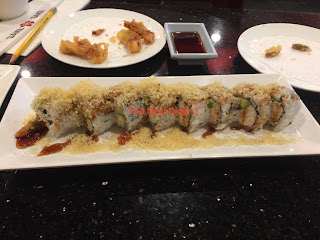 Crunch roll-crabmeat and shrimp tempura inside, crunchy outside.  Most of the shrimp tempura they used in the rolls were small or not that fresh.  One piece has the tail with very little shrimp. 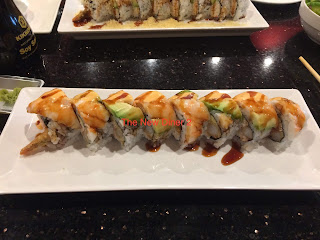 Shrimp lover: Crabmeat and shrimp tempura inside. Outside- shrimp and avocado.  A very good roll!! 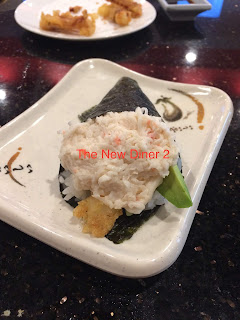 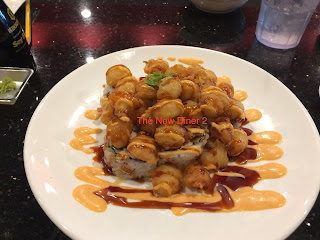 Scallop Tempura roll- crabmeat, avocado, cucumber.  Outside-scallop tempura.  The scallop tempura was awesome!!  There are a ton of them, and all cooked perfectly! 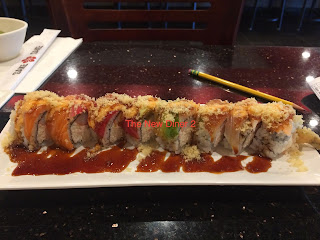 Crunch Rainbow Roll-Salmon, tuna, albacore outside. Crabmeat, crabstick, shrimp tempura inside.  This had a bit too much sauce, but a good dish.

Sake Sake Sushi was pretty good, but not as good as some other all you can eat sushi restaurants.  I won't go back. 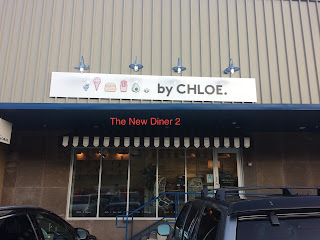 by Chloe is a vegan restaurant that is attached to the Whole Foods 365 store in Silver Lake.  It's a fast casual restaurant with a few tables spread around the restaurant.  You can walk directly into the 365 store, without going outside again.  Chloe has a few locations, some in the northeast and in Europe.  I believe this is their only 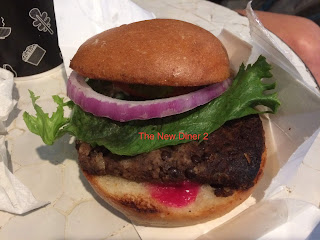 I didn't mean to shout, but Chloe's website had the descriptions in all caps.  I'm too lazy to write type all that.  Anyways, a damn good burger.  Very good flavor, the potato bun held up well to the patty and toppings. 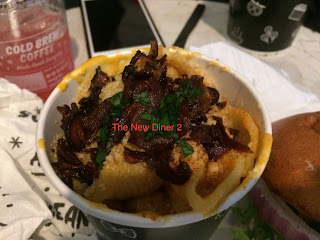 Large Mac & Cheese, $8.95. SWEET POTATO-CASHEW CHEESE SAUCE, SHIITAKE BACON, ALMOND PARM.  The shiitake back threw me off, because it tasted like real bacon, a bit less smoke flavor, but still very good.  The cheese sauce was good and the huge shells, cooked perfectly, were coated with the liquid gold.

I would go back to Chloe again! 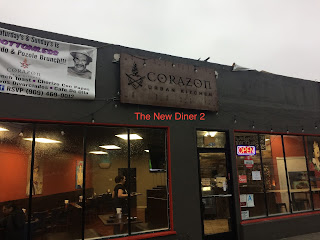 Both, David Allen, and, Eating on Garey, reviewed Corazon Urban Kitchen. If you read those two reviews, you know the history of Corazon.  A quick recap; Corazon opened in downtown Pomona and closed within a few months due to a dispute with their landlord.  They opened up near the Pomona Valley Hospital.  I decided to give them a try, after a friend said we should go to lunch.  So, in a very raining day, we headed over to Corazon.

Parking is terrible, as mentioned in the two reviews.  We drove through the alley, just south of the building, and into a neighborhood.  The signs said only four hour parking, and a street sweeping sign, so we parked there.

Chips and salsa, very good, came out quickly after we were seated.  They had lunch specials and we got there during their taco specials!. 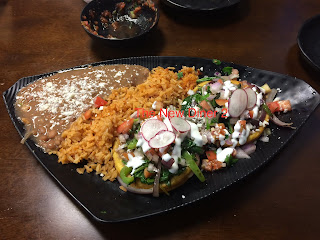 Sopes lunch special- $7.99, with rice and beans.  They were kind enough to substitute veggies instead of meat.  There were spinach, radishes, red onions, tomatoes, celery, green bell peppers, and cilantro, topped with creama.  This was good, but the sopes were hard and dry, even with all the veggies on top! 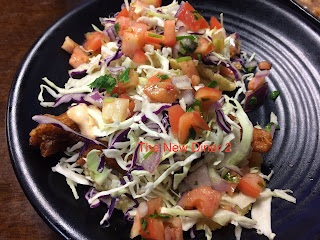 Fish taco- $2 during taco special, which is Thursday from 2pm to about 6pm.   They used tilapia and it's fried.  But, this was a dry, bland fish taco.  They either forgot to put the crema and/or salsa.  The fish had a good crunch, the veggies were fresh. 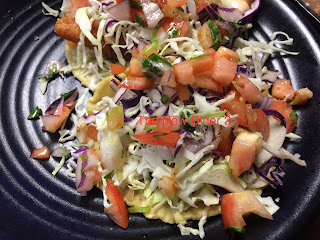 Shrimp taco-$2.50 during taco special.  The shrimp are grilled and had a ton of flavor.  This was very good and much better than the fish taco.

I wasn't blown away with Corazon, but it's offers good portion lunch specials, at a good price. 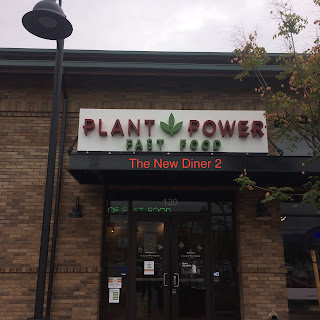 I had the vegan Big Mac from Doomie's Home Cookin', which was great, and Organix, which was only ok.  I heard about Plant Power Fast Food, a San Diego based plant based, fast food chain, that is just starting to expand.  There are a couple locations in San Diego and they will soon open in Long Beach.  This Redlands location opened in August of 2018. 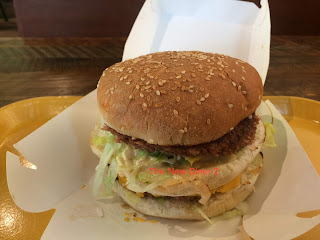 Vegan Big Mac-$8.95- two all vegan patties, special sauce, lettuce, cheese, pickles on a sesame seed bun.  This was great!  The patties, I'm guessing a soy mix, was great-tasted just like beef.  The sauce, and cheese were spot on.  Good bun and fresh veggies.  Not only is this less expensive than the vegan Big Mac at Doomies-which does include fries, but at $18, it is much better tasting.

I would go back to Plant Power anytime!! I can't wait until they open in Long Beach, and hopefully they will open all over Los Angeles!
Posted by Johnny Diner at 2:07 PM 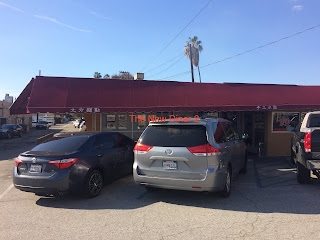 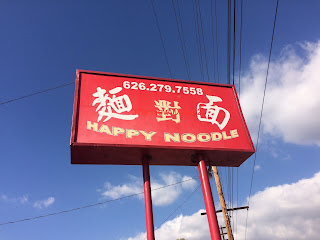 I found out about Happy Noodle a few months ago, and finally got around to trying it.  Located next door to a liquor store and an apartment complex.  It's a small restaurant, that takes up two spaces in this strip mall.  You walk into the lobby, and the kitchen is to your left and the dining area is on your right.  There are about 10-12 tables, most of which were empty I got there, but packed within 30 minutes of being there. 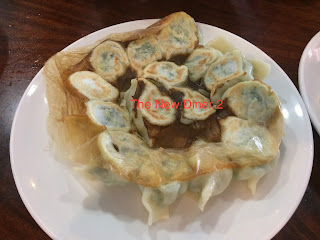 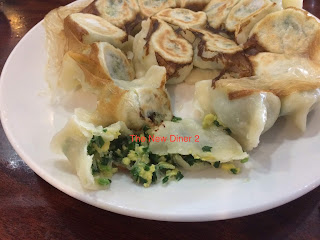 Pan fried vegetable dumplings- $7.50.  This was terrible!  Visually, it doesn't look good with that black film  Inside the dumpling was chives, glass noodles, and eggs!  So, if you're a vegan, you can't have this dumpling!  But, this lacked flavor. 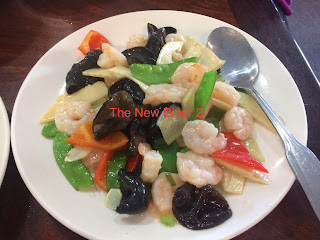 Stir fried shrimp- $11.50.  As bad as the vegetable dumplings were, this stir fried shrimp was awesome!! Snap peas, red bell peppers, and fungus in a light sauce.  The shrimp was medium size and plentiful!  After a taking a couple spoonfuls, I counted the amount of shrimp and got 10!!  There must have been 12-15 shrimp in this dish.  Great flavor and well worth the price! 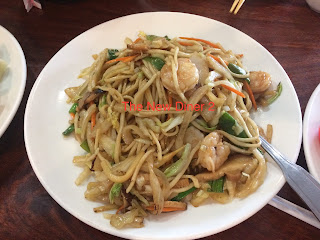 Shrimp chow mein, $7.95.There were a good number of shrimp, and the noodles were cooked perfectly.  Carrots, snap peas, mushrooms, and onions filled out this dish.  A very good example of shrimp chow mein!

I would go back to Happy Noodle.