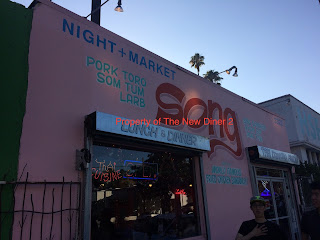 Night + Market Song is a very popular Thai restaurant in the heart of hipster-land, Silver Lake.  Located a few doors down from the great, but now closed, Knuckle & Claw, it's a small restaurant but there is usually a long wait.  The evening I went, either the air conditioning was out or they don't have air conditioning!  So, it was hot inside the restaurant even though LA was going through a cooling trend after a week of record high temps!.  The restaurant was about 60% filled, so I can only imagine how hot it will be with a packed restaurant. 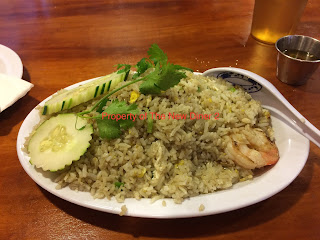 Shrimp fried rice, $14.  There was some green onions, eggs and four medium sized shrimp. This was a pretty bland dish.  They need to add seasonings in addition to the small amount of soy sauce.  Another small thing was the portion size!  I was starving when I came and the amount barely put a dent into my hunger!  This is one of the most overpriced dishes I have ever had at any restaurant!

Service, except for the host, was very good.  They seem to have a community service, one person took my order, another refilled my drink, yet another delivered my food.  All were nice and friendly.  I even had another server ask me if I had already been helped!  So, I have no complaints about them.  But, the host was terrible.  I came alone and decided to sit at the bar, where there was only one other person, that has about eight seats.  There isn't much space between the bar and the tables, so I sat down and the host said if we get busy I'll have you move down.  I said I'm not going to move.  Let those people wait.  He then poured my a cup of water, but at the other tables he gave them a carafe of ice water.  The entire time I was there, maybe 45 minutes not one person came to sit at the bar and maybe four people came into the restaurant.  Of course, nobody can predict how many people are going to come into a restaurant at any given time.  But, the bar had only one customer and I sat where I was comfortable.  I sure as hell wasn't going to move for that douchebag host.

I wouldn't go to  Night + Market Song again.  I don't know why they have long wait for below average food at high prices.  Thai Town isn't that far away and you'll get much better food at prices that are about 40% less!  I'll leave  Night + Market Song to all the douchebags hipsters of Silver Lake.
Posted by Johnny Diner at 11:10 PM 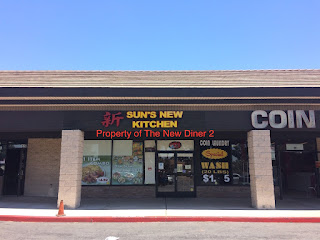 I found Sun's New Kitchen when I was driving along Azusa Ave.  I thought it would be like Panda Express- a steam table filled with Chinese food and you pick what you want.  While there is a steam table, it's really just for decoration!  They cook to order your meal,including the 1-3 item combo meals!  They have a limited menu for the combo meals, about eight items.

There are about ten tables inside this restaurant.  It's very nice and clean.  I'm shocked there weren't that many people here! 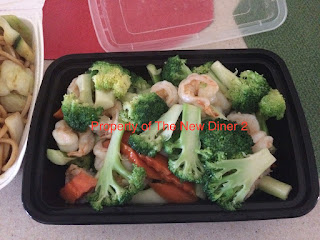 Shrimp and broccoli, $9.99. This was a very good dish, with lots of medium sized shrimp that were deveined.  A light sauce, with crispy broccoli and carrots.  Well worth the price and a much better deal than many other Chinese restaurants! 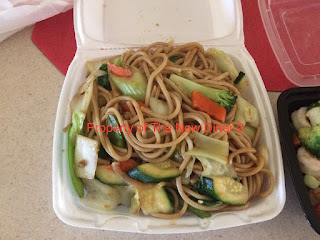 Vegetable chow mein, $6.99, with celery, carrots, broccoli, zucchini and cabbage.  The veggies and noodles were cooked perfectly.  I would prefer the veggies to be cut into smaller pieces, but otherwise an outstanding dish!  A huge portion too!

Service is good.  The lady, who I believe is the owner was very nice and friendly.

I would go back to Sun's New Kitchen anytime!  Very good food, big portions and great prices!
Posted by Johnny Diner at 10:50 PM 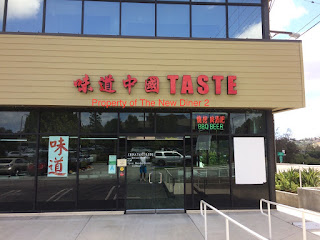 China Tasty & BBQ is a new restaurant that replaced Misora, a now closed sushi restaurant.  It's actually going back to it's roots, this location used to be Shanghai Palace, a very popular Chinese restaurant.  I went on Monday after seeing their menu.  But, there were closed, even though their signs says they are open on Monday!

It's a big restaurant with about 20 tables, all of them empty the day I went.  Maybe people haven't heard about China Tasty & BBQ?  They have a large menu with BBQ items and your standard Chinese items. 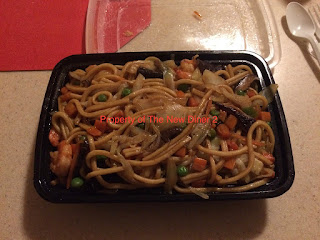 Shrimp chow mein, $9.99, peas, carrots, mushrooms, fungus, cabbage.  This was very good expect the noodles were a bit undercooked and the peas and carrots were clearly from the freezer.  But, otherwise this was a well balanced tasty dish.

A few things that China Tasty has to correct.  On their door the days and hours are listed as Mon-Sat., 11am- and unlisted time.  On their business card it says they are open 7 days.  The reality is they are open Tues.-Sun.  They are closed on Monday.  I'm guessing the hours listed on the door was the hours for Misora and China Tasty never bothered to take it down!  They need to list their correct hours to prevent people from wasting a trip!
Posted by Johnny Diner at 9:14 PM 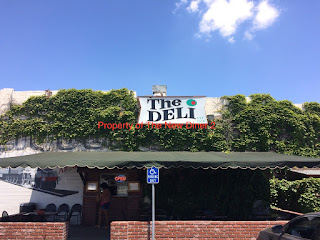 A few blocks east of Bright Star Thai Vegan and Supreme Plate, is The Deli.  A Rancho Cucamonga institution since 1968.  It's not a true deli, it's really a sandwich place.  A big dining area inside is highlighted by a toy train track with a working train!!  The place could use a good dusting, especially the train track, otherwise it's a pleasant place for a sandwich.  A great place to eat your sandwich is the covered outdoor patio. 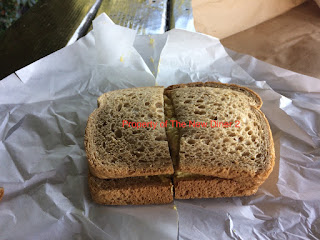 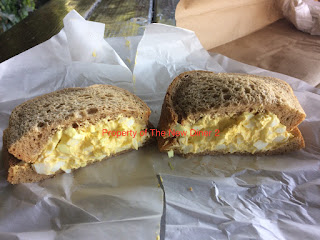 Egg salad on wheat, $5.99.  The wheat bread was straight out of the bag, not toasted or anything.  The egg salad was all eggs, no fillers.  It was a bit salty, but otherwise acceptable. Nothing outstanding.

Service was good.  The lady who took my order was nice and friendly.  The sandwich came out quickly.  There is a window at the covered patio.  Not sure if the window is to place an order or a pick up window!

I wouldn't go back to The Deli.  There is nothing special about the sandwich I ordered. 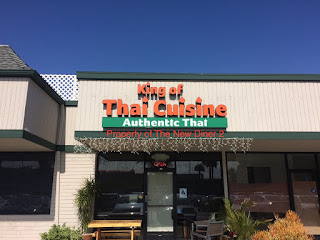 In the same strip mall as Kawaii Sushi, is King of Thai Cuisine.  It's a small restaurant with about 10 tables.  It was pretty empty when I went on a Saturday, about 5pm. 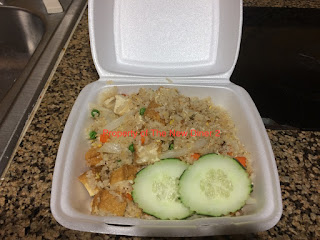 Tofu fried rice, $8.95 onions, carrots peas, and cucumbers.  The tofu was well cooked outside and soft on the inside.  The rice and veggies were all well cooked.  But, this lack seasoning and flavor.  It was pretty bland.

I wouldn't go back to King of Thai Cuisine.  I'm sure there are much better Thai places in San Diego! 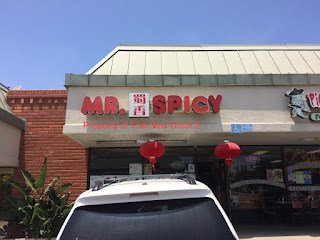 I was in San Diego over the weekend and found Mr. Spicy.  It's a small restaurant in a small strip mall.  There was no customers in the restaurant on a Saturday during the peak lunch time!  That's usually a good sign the food isn't that good.  I decided to give them a try and see if that theory holds. 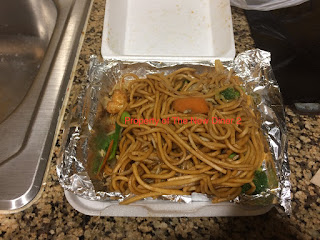 Shrimp chow mein, $7.99.  There weren't that many shrimp in the chow mein, maybe 6 small sized shrimp.  You can only see one small piece of shrimp in the picture.  The noodles were cook perfectly.  The veggies, broccoli and carrots were well cooked.  I really liked the fact the broccoli was cut into small bite sized pieces.  But, this wasn't seasoned very well.  Simply more salt or soy sauce would have made this dish very good.  It was just ok.  A good amount of food for the price too.

Service is good.  Interesting at the host stand there is a sign-This restaurant has only one waitress.  Her English is not very good. Thanks for your understanding.  Apparently that waitress was off because the lady who took my order was nice and while her English was fine.

If I'm back in San Diego, I would give Mr. Spicy another try and I would order something spicy.  Hopefully that dish is well seasoned!
Posted by Johnny Diner at 7:32 PM 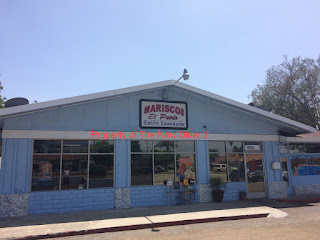 As you can see Mariscos El Puerto used to be a gas station in it's past life.  It's counter service and they have a bar, if you want to wash down your fish tacos with a beer.  I was surprised that the dining area was pretty large.  There are about 15-20 tables. 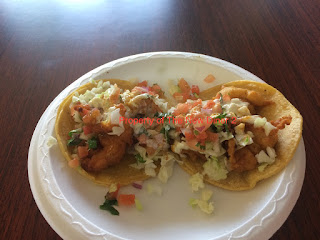 The first thing about these tacos is that the tortilla is made from corn.  I actually like corn tortillas better because they are firmer and hold up the toppings better than flour tortilla.  When I asked what the fish tacos were made from, I was give the answer a "white fish, sea bass." I'm pretty sure this is swai fish.  It was well cooked,  crunchy,  but there is a bit too much batter.  The shrimp didn't have as much batter as the fish, and there were about 3-4 medium sized shrimp in this taco.  All the toppings were fresh.  Overall I like the fish taco, really like the shrimp taco.

I understand the fish tacos are $1 on Tuesdays.

Service is friendly and pretty good.  BUT, there was a group of three women in front of me when I arrived.  The must have taken 10 minutes to order their damn food!  I mean, how do they handle what I assume is a busy $1 fish taco lunch rush?  The lady taking the order was nice and friendly, but she didn't have a clue about what fish they use or didn't want to tell me!  She also took forever taking the orders of the 3 ladies in front of me.  The tacos came out quickly.

I would go back to Mariscos El Puerto, I like the nostalgia of an old gas station turned into a restaurant.  I will go back on a Tuesday and see how busy they are and how quickly they get through the line!
Posted by Johnny Diner at 5:50 PM