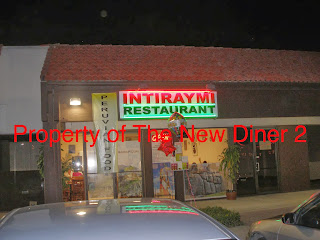 So Diamond Bar gets a Peruvian restaurant and I finally get a chance to try it.  Located in a strip mall behind a gas station and an overpriced Chinese restaurant-that I won't go to, Intiraymi Restaurant has been in Diamond Bar for about a year.  It is a good sized restaurant with seating for about 20-25 people, though the decor is very basic. 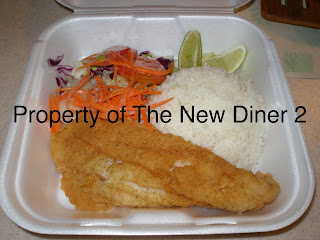 Pescado Frito-fried fish-sea bass with steamed rice and salad, $11.95.  The fish was lightly battered and well fried but very bland.  The fish itself was moist and flavorful.  I would guess they use fresh, not frozen fish, but I could be mistaken.  The rice was fine.  The salad was standard.

Service was good.  The man who took my order, who I believe is the owner, was nice, friendly and helpful.  I got the order quickly, considering they had to fry the fish.

I was disappointed with the fried fish.  Some of their other dishes look great and I may give them a try the next time I go to Intiraymi Restaurant.
Posted by Johnny Diner at 10:30 PM 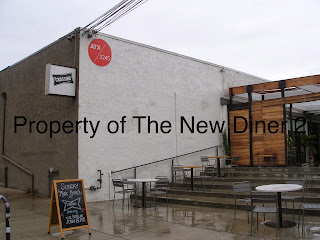 The Crossing is actually an industrial park split into artist studios, the Atwater Village Performing Arts Center, and the dining options.

I really don't know how to describe dining options at The Crossing; a neighborhood meeting spot with a few dining options?  Two separate restaurants?  Anyways, The Crossing has Ocie's Texas BBQ, a pizza restaurant, and a coffee place.  There are plenty of tables inside and outside. 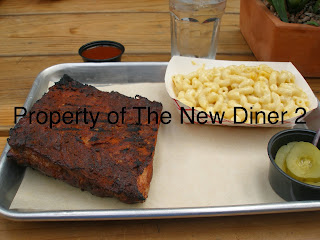 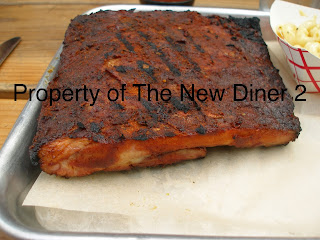 Spare ribs plate, $12, with double mac and cheese.  Texas BBQ means mesquite wood is used to smoke the meats.  The smokers are right next to the patio, so they do smoke their meats.  But, they haven't perfected their meat.  The ribs were tough, chewy and needed to be in the smoker for another two hours, at least one more hour.  The rub is heavy on the paprika with slight hints of cumin.  I wasn't impressed.

The mac and cheese needed more cheese sauce, though the macaroni was well cooked.

Service left a lot to be desired.  While the server was friendly, she didn't come around often.  We lacked for refills and somebody at the table had to ask three times for coffee before finally getting it.

I wouldn't come back to Ocie's Texas BBQ again.  Poor food and service.
Posted by Johnny Diner at 2:27 PM