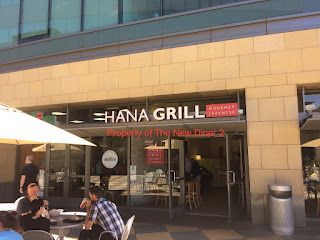 Anyways, as we walked around we saw Hana Grill and decided to eat there.  It's a small restaurant with a few tables inside and, as the above picture shows, there are tables outside.  Hana Grill is a mini chain with a few other locations.  The only Asian person working was an older lady who maybe the owner.  Interesting!  It's basically food court food.  I'm not expecting much. 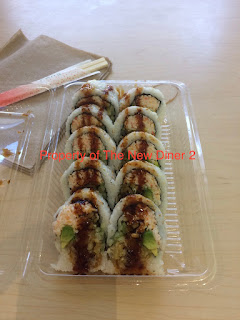 Shrimp tempura roll-$8.45. This was actually pretty good!  This is better than some regular sushi restaurant.  10 pieces filled with shrimp tempura, avocado, crab and cucumber.  Everything was fresh, except the shrimp tempura- which I'm sure is frozen.  But, the shrimp tempura was good, it even had a nice crunch.  They did add a bit too much sauce, but this was a good roll.

Service took too damn long!  There must have been at least ten people who got their orders before I did, and they ordered after me!!  Ok, most of them ordered teriyaki, but it shouldn't take about 10 minutes to make a damn roll, even though it was during the lunch rush.

The young lady who took my order wasn't friendly at all.  But, to my shock she was nice when she was wiping down my table, while I just got back from picking up my order.  She said something like "I didn't want to throw away the soy sauce, and napkins. I thought it maybe somebody's."  Why she just went through the motions while taking my order, who knows.  The other young lady behind the counter was nice.  She noticed I was standing there waiting for my order, asked me what my number was, and then, even went back to the kitchen to check.

I was pleasantly surprised by the quality of the shrimp tempura roll.  Was it the best roll ever?  No, but a solid 8 on a scale of 10.  Which I think is pretty damn good for a food court restaurant!
Posted by Johnny Diner at 9:57 PM