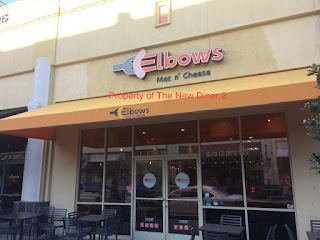 Elbows Mac N Cheese might be where Berkeley Dog used to be.  Anyways, a new restaurant in the ever changing Birch Street dining and entertainment center.  There was a Red Brick Pizza and a Fatburger that also called this address home.

It's a fairly small restaurant with counter service.  There are tables as you walk in and the counter is along the back of the building.  There are also about 3-4 tables outside. 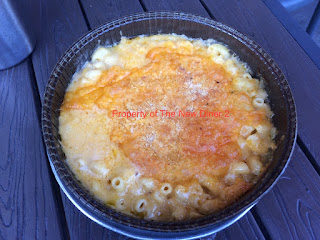 Regular sized blue box mac and cheese-$7.55, with American and cheddar cheese.  This is a huge portion size.  The macaroni was cooked perfectly!  The cheese sauce was kind of bland but it did cover the macaroni.  Now that well done cheese topping kind of threw me off.  But, overall an ok dish. 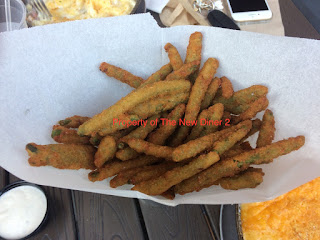 Greenbean fries-$6.95.  I don't know why greenbean fries aren't the new thing!  They are so good.  A nice batter covering the greenbeans!  I'm betting it's frozen, but these were very good.

Service is ok.  The girl who helped us was nice and friendly, but when we walked to the counter she just disappeared to the back.  She made eye contact with us, but still went to the back.  Not sure why, but at least say something before leaving us hanging at the counter.

I wouldn't go back to Elbows again.  The main draw, the mac and cheese, was ok.  But, nothing outstanding.