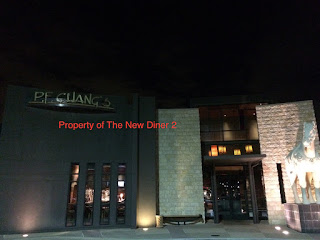 Hard to believe I never did a review of P.F. Chang’s, mostly because I don't like to review chains.  But, hell I did review Pei Wei, why not do P.F. Chang’s!  If you're looking for authentic Chinese food, you won't find it at PF Chang's!  But, they are what they are, Americanized Chinese food.  I've actually only been to Pasadena and this Chino Hills location.

The Chino Hills location is a huge stand alone restaurant.  There are booths along the left side the restaurant, benches and chair seating on the right side, and tables in the middle. It wasn't that busy the night we went. 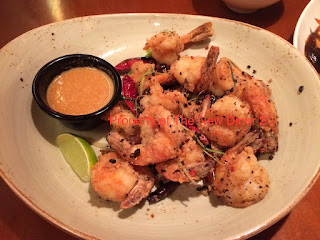 Salt and pepper prawns-crispy pawns, chili peppers, aromatics, $19.99.  This was good, but too salty.  The prawns were well cooked, but too salty. This is overpriced for the quality of the food.  The shrimp chow mein at Chin Chin was less expensive, and was much better!  I would also bet, if you weighed the shrimp from both places, there were more shrimp by weight at Chin Chin, than here at P. F. Chang's! 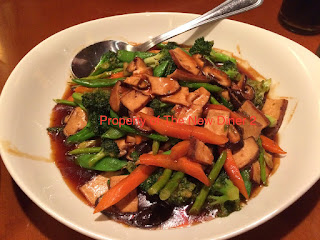 Buddha feast-$9.99-broccoli, carrots, shiitake mushrooms, savory sauce. Well cooked, but again too salty.  All the veggies were well cooked, and the sauce would be good, if they put 25% less salt!

Service was good.  Our server was nice and friendly.  But, we got no silverware or the cloth napkins.  Not a big deal since they had chopsticks, and there were paper napkins.  But, P. F. Chang's isn't the type of place I expect to use paper napkins.