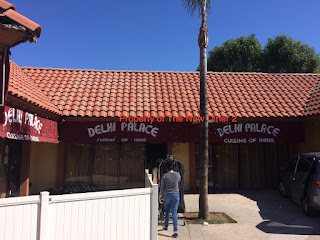 A few blocks west of Cavaretta's Italian Groceries, is Royal Delhi Palace.  Located in a huge shopping center with a Ralph's as it's main anchor.  Royal Delhi Palace takes up four stores in the center.  The three other places are for banquets.  The main dining area is to the left.  It's a good sized restaurant with about 20 tables.  There is a long buffet table along the far wall.  One of the very few Indian restaurants that serve the buffet on weekends.  I took full advantage of the buffet.  It is $8.99 everyday.  Some restaurants would raise the price on weekends.

There is a decent selection of items on the buffet table.  They have a couple chicken dishes for meat eaters.  There were about 6-8 items for vegetarians. 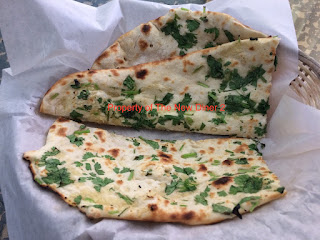 Garlic naan bread.  This should be renamed cilantro bread.  Filled with a ton of cilantro but very little garlic.  Just average. 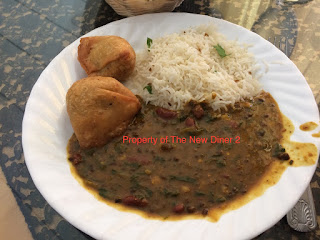 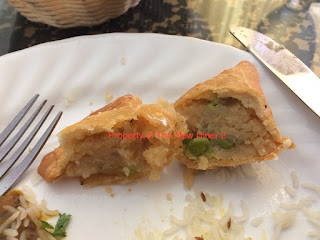 Basmati rice, samosa, and yellow daal.  I'm surprised to see samosa on the buffet, since it is usually pricey and, if good sells well on the regular menu.  But, the samosa was abundant on the buffet.  A good example with well seasoned potatoes and peas, with a light flaky outside.

Yellow daal-good but a bit underseasoned.  Whenever I go to an Indian restaurant I expect/know the food will be flavorful with a lot of seasoning and spices.  This was lacking the seasoning, but had a nice kick. 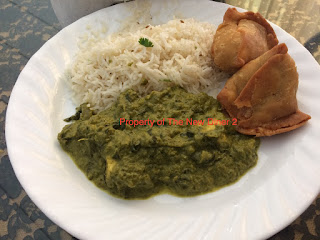 Saag paneer-spinach and cheese.  Usually don't see saag paneer with cheese, but this was good, but again, underseasoned.  Matter a fact, pretty bland. 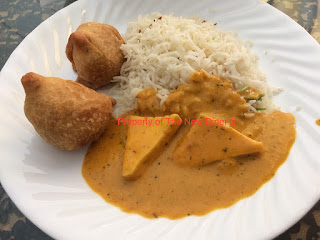 Shahi paneer-curry sauce with Indian cheese.  This is something new for me.  The curry was pretty bland and the cheese was firm and had a very mild taste. 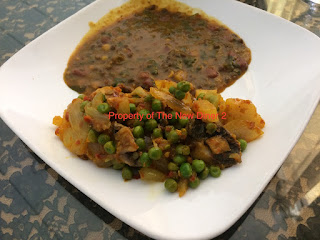 Service was good but very military like.  They had two servers in charge of the entire room.  While the room got a bit packed, they handled everything.  Nobody lacked for refills or having their plates cleared.  But, they would just stand towards the front of the room and just stare at every table, waiting to pounce on a finish plate or empty water.  It's almost as if they would get fired if even one plate was left on the table.  It's just weird to have servers so intense!  They need to take a chill pill!

Royal Delhi Palace was well worth the price, but the food lacked seasoning.  There are many other Indian restaurants to try, so no need to come back!
Posted by Johnny Diner at 1:27 PM