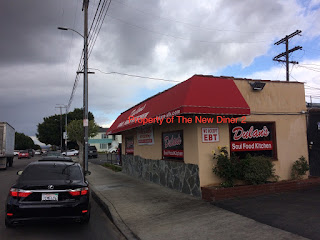 I went to Dulan's back on  May 7, 2017. I finally found the pictures, so here is the review.  I went to the Dulan's on Manchester, and didn't think too much of the food.  But, I read that Adloph Dulan passed away in May 1, 2017, and decided to try the Dulan's on Century Blvd.  Mr. Dulan first opened an Orange Julius, an old school orange juice store, that were in malls all over.  Then he opened Hamburger City and then expanded to a few locations, including Marina Del Rey.  At the Hamburger City in Marina Del Rey, he turned it into Aunty Kizzy's, and his soul food empire took off. There is a Dulan's on Crenshaw, that is owned by his son, and these two Dulan's.

The first Dulan's on Century used to be just went of Crenshaw.  But, they moved within the past year or so, to a location a few blocks east on Century, at the location of the former, Berth's, a very good soul food restaurant.

This Dulan's is a small restaurant with the steam table as you enter and some tables at the far end of the restaurant.  There are some tables outside.  But, this is mostly a take out operation. 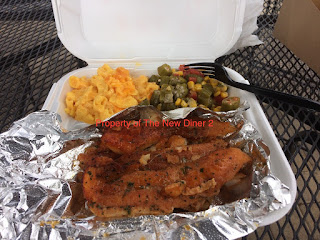 On Sundays Dulan's serves their Sunday Dinner the entire day.  You can pick an entree, with 3 sides, a dessert and a drink.  Baked fish, dressing, mac & cheese, orka and corn, $19.45.  The dressing is underneath the fish.

This fish is swai, which is close to catfish.  This was very well seasoned and flavorful. The fish is mild in flavor and has a nice flakey texture.

Mac n cheese was very good.  Nice creamy cheese and perfectly cooked macaroni.  I only ate the corn and it was very good.  Okra and I just don't get along.  The dressing, some may call it stuffing, is very good.  Full of flavor, you'll notice pepper and celery, and filling.

Service was very good.  There was a huge line on the Sunday I went, it went out the door.  But, the line moved very quickly.  When you got inside the door, a very nice lady took your order, wrote it on the container and then she dropped it off to the workers behind the steam table.  It's a very well run process, and it moved quickly.