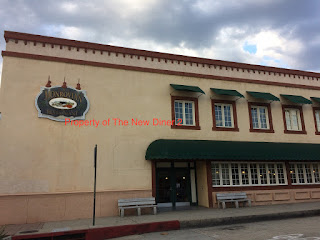 According to the sign, Monrovian Family Restaurant opened in 1979.  Located a few blocks north of Gene's Grinders and Jake's Roadhouse, and a few blocks south of Mikomi, in a huge two story building!  It seems as though the decor hasn't changed since the 1980's; it's a very dated decor but a clean restaurant.  The restaurant itself is huge, with plenty of booth seating.  The clientele is older people, many of them who are regulars.  I heard both the server and the manager, at least I think he is the manager, call people by name! 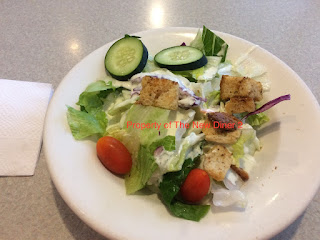 Salad was pretty standard with iceberg lettuce, tomatoes, cucumbers, and croutons. Some of the lettuce was very bitter!  But, it was drowned in dressing!  Order your dressing on the side. 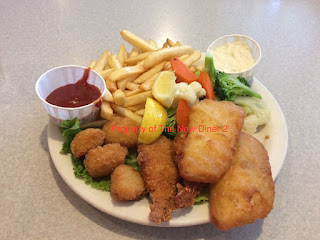 Seafood plate, $15.49 with soup or salad, fried cod, fried shrimp and fried scallops with fries or rice or cole slaw.

I can just tell by the price the seafood was going to be frozen.  It was.  The fried shrimp was very hard and too crunchy.  It also wasn't that hot, as if they were sitting under heat lamps.  The scallops were too mushy but had a good crunch.  The cod was too greasy and it surprised me that batter was thin!  It was mostly cod with a light coating of batter.  The fries were lukewarm and were clearly under heat lamps.

Service was good by the server.  She must have came around ten times during the time I was there.  She was nice and helpful.  After eating dinner, I went to the restaurant and there was the guy, who I believe is the manager, behind the counter on his phone.  He never acknowledge me!  Most people behind the counter would have said thank you, come again.  But, he was too busy on his phone!  Bad customer service, especially by a manager!!

Monrovian Family Restaurant is mediocre at best.  I won't go back.
Posted by Johnny Diner at 7:06 PM