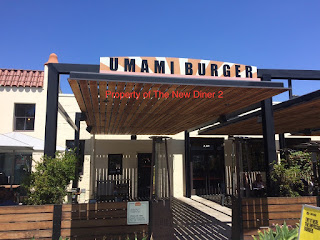 I recently found out about the Impossible Burger, a 100% plant based burger that is suppose to taste just like beef, and it bleeds too!  I guess after a ton of research and money spent to finding a plant based burger that tastes like meat, the Impossible people found that heme is the key ingredient for the burger.  In the back of my mind, I'm thinking this is engineered food, you know the GMO's that has every company putting Non GMO on their labels.  Something that came out of a science lab!

Now, I'm not a fan of fake meats!  I'll try it but if I wanted to eat meat I would just eat meat.  I understand some restaurants are trying to attract people who maybe trying to eat healthy or if they are a vegetarian restaurant they will want to offer something to appeal to the meat eater in the group.

I've tried the veggie burger made with mushrooms and edamame patty, at the Umami in Costa Mesa and it was terrible. I noticed that they have replaced that veggie burger with a falafel veggie burger. Umami burgers are not vegetarian or vegan.  They use a fish sauce in all their burgers, thus making it pescatarian.  I have heard they use that fish sauce in the ketchup, but I can't confirm that.  The bun contains eggs, which would prevent vegans from eating.  They do not have diary-free cheese. But, they can make a vegan Impossible Burger. 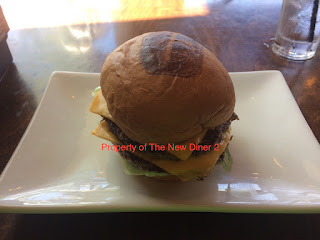 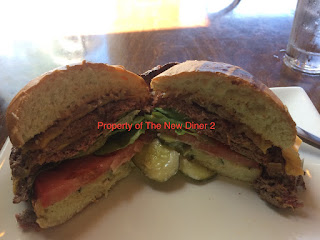 Impossible burger $16, two Impossible Burger patties, caramelized onions, American cheese, miso-mustard, house spread, dill pickles, lettuce, tomato.  The patties did taste a lot like beef, but there was a weird texture to the patty.  A bit chewy and even if I didn't know this was a plant-based burger before, the first bite would have told me it wasn't a meat burger.  It's ok, nothing great and I certainly don't think it's worth the price.

Service is ok.The hostess was nice, but when I walked in there were plenty of tables open but she went off to set up table and didn't come back for a few minutes.  Then a guy, who turned out to be my server, asked how many, and I was seated right away.  WTF was that hostess doing??  The server was nice, friendly, knowledgeable about the mean, and really helpful.  When I ordered the Impossible Burger, he told me it is not vegetarian or vegan.  Since, I'm pescatarian, I was fine with that.  But, many servers have no idea about the menu.  That's very poor training on the part of the management!  Have the chefs tell the servers what is in the dishes!  I don't care if the servers don't remember all the ingredients, and they need a "cheat sheet," just give me the damn correct information.