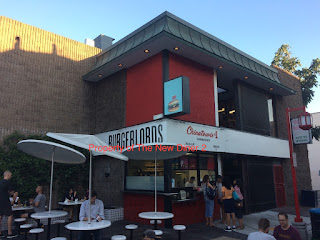 Burgerlords was listed in the Top 9 best veggie burgers in LA by Discover LA.  I already tired and loved The Park's veggie burger, so I was looking forward to trying other veggie burgers.  But, when I read that Burgerlords is owned by the sons of the owner of Oinkster, I had some doubts.  Why? About 3-4 years ago I tried the veggie burger at Oinkster and found out it was a veggie patty they bought at a store!!  Not home made!  But, I was near Chinatown and figured I would give them a try.

Located a few feet east of the Bruce Lee statue, Burgerlords is trying to copy In N Out or trying to be the hipster In N Out.  The Chinatown location is a to go place, but there are a few tables.  I don't know who is responsible for cleaning the tables, but they needed a good cleaning.  So much trash on the ground nearby!  You would never see that at In N Out! 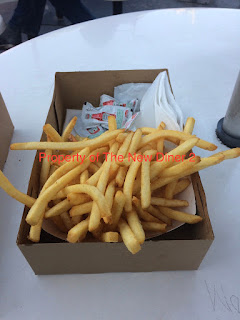 Fries, $2.25.  Their website says shoestring private reserve, Kennebec potatoes.  I have a feeling there are frozen.  But, they were cook very well and seasoned.  I liked the fries, and the portion size is huge! 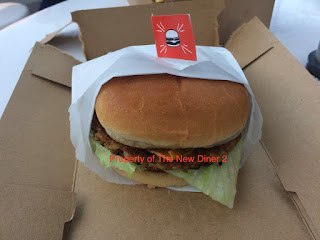 Vegan cheeseburger, $6.50.  At least Burgerlords makes their own veggie patty!  From their website:"made fresh, in house everyday.  It consists of a custom blend of vegetables, grains & spices that includes nuts, gluten & soy. "  I could taste and see barley, roasted mushrooms, eggplant, leeks, chickpeas, and cashews as Discover LA mentioned.  This burger is very dry and flavorless.  I wasn't impressed.  Maybe if there were more of the vegan thousand island dressing.  Hell, maybe just some salt and pepper.  I wasn't impressed and thought the $6.50 price tag is way too high!

Service was fine.  They were nice and the food came out quickly. 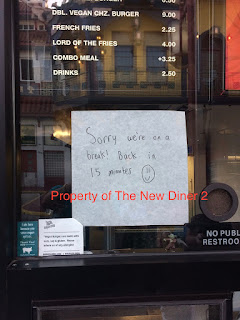 But, just as I was finishing my meal, I noticed they put this sign up in the window.  WTF is that?  What business worth a damn does that?  There were three people working.  Unless there is an emergency, then there is no reason to close the restaurant!   There were at least six people waiting while this sign was up.  I don't think this burger is worth the wait!

I wouldn't go back to Burgerlords again!  If douchebag hipsters want to spend $6.50 for a veggie or beef burger, basically 50% higher than a double-double at In N Out be my guest.  I'm not going back to Burgerlords!
Posted by Johnny Diner at 8:55 PM