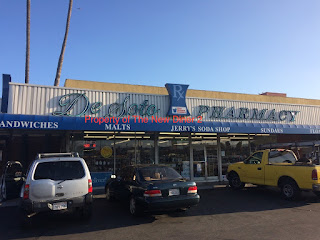 After having terrible pizza at Barone’s The Pizzeria Express, I went to DeSoto Pharmacy/Jerry's Soda Shop for some ice cream!  As the name suggests, this is a pharmacy with a soda shop.

The soda shop is has a small counter with about ten stools and a couple tables. 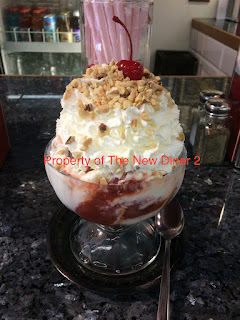 Two scoop strawberry sundae, with cherry vanilla and toasted almond, $8.20 with tax.  They use Fosselman's Ice Cream which is good stuff.  The ice cream I picked was great, much better than the flavor I had my first time at Fosselman's, and the toppings were good.

If I lived in the Valley, I would go to De Soto Pharmacy.  But, since they use Fosselman's Ice Cream, there is no need to drive all the way out to the Valley.  I  can just go to Alhambra and get the samething!
Posted by Johnny Diner at 8:42 PM