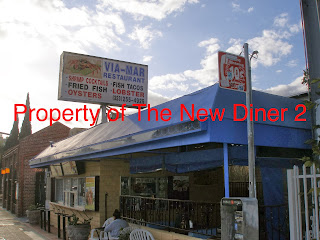 So, Valentina Silva's blog, Eastside Food Bites, is a new found resource for restaurants I want to try, especially in areas like Highland Park, Silver Lake, Los Feliz, and Echo Park!  She reviewed three fish tacos restaurants; two of which I have already tried; Tacos Baja Ensenada and Ricky's Fish Taco, which is a stand, not a restaurant, but Via-Mar Seafood I haven't tried, yet. Valentina actually did another review of Via-Mar Seafood, for their other seafood items.

Via-Mar Seafood Restaurant is a small restaurant, with only outdoor seating.  It's on the very busy Figueroa St., and you maybe asked to buy candy or give spare change by some of the people walking along the street. 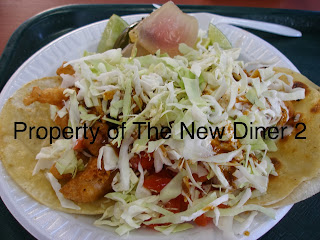 Shrimp taco, $3.38, deep fried shrimp with cabbage, tomatoes, crema and sauce.  Since I went on Tues., I got the 2 for 1 deal.  These shrimp tacos were huge!!  The batter is very light and crispy.  But, the shrimp was tough and chewy.  Leads me to believe the shrimp was either frozen or it wasn't very fresh.  There is too much cabbage for my tastes, but the tomatoes were fresh.  The sauce was kinda of just there, didn't add much flavor. 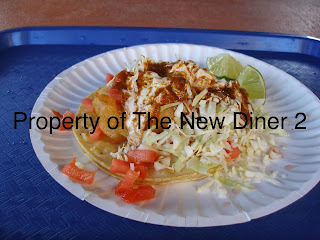 Fish taco, $2.47.  Deep fried basa fish with cabbage, tomatoes, crema and sauce.  The batter for the fish was the same as the shrimp.  But, the fish was much fresher and tastier.  This is a big portion of fish.  Again too much cabbage and the same bland sauce.   There is the perfect amount of crema.

The first time I went was for the Tuesday special, then went back on Thursday.  Both times the service was friendly and quick.

I liked the fish taco better than the shrimp tacos here.  But,  I wouldn't rush back here.
Posted by Johnny Diner at 8:34 AM