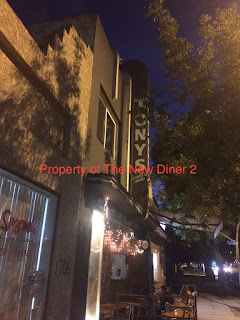 Tony's Darts Away is owned by the same people as Mohawk Bend, and while it's mostly a bar, they have a great menu, over half their items are vegan or can be made vegan!  No, I am not vegan.

It's a fairly small bar with maybe six tables outside, a huge bar on the right and tables on the left.  A pool table takes up the back room.  It's a dark place and even with the music on low, it is loud because the acoustics are really bad there.  A packed bar and people talking in normal voices, it just echoes and makes it a loud place. 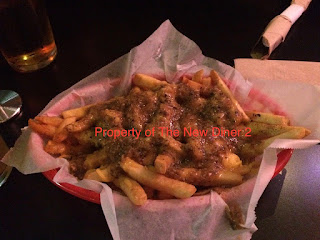 Disco Fries-gravy and cheddar $7.  This is could be vegan if you get the vegan cheddar cheese.  But, since I'm not vegan I got the regular cheddar.  The gravy is a mushroom gravy and full of flavor. If somebody tells you vegetarian or vegan food is flavorless, they just haven't been to the right place.  The fries are cooked perfectly and the cheese is melted.  I prefer getting the gravy on the side and dipping the fries in the gravy, with melted cheese it's awesome.  A good dish and a steal at $7. 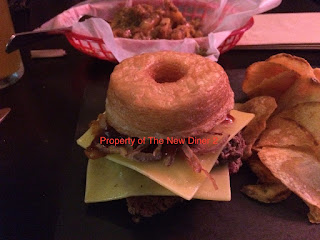 I had the Umami Burger version of the Impossible Burger, and thought it was ok.  So, when I saw it on Tony's menu I decided to see how their version tasted.  The major difference is the donut-croissant bun, which was different but good.  It wasn't sweet but held up well to the burger  The vegan provolone was awesome, good flavor and texture.  The vegan bacon, I'm guessing seitan, was always very good.  The BBQ sauce and onions added great flavor and texture to the burger.  I like this version of the Impossible Burger better than Umami's!

Service is pretty good.  You order at the bar.  It says so on the menu.  But, if you're just there for drinks and don't look at the menu, you won't know that.  I was sitting outside waiting for my friend, there were only three tables taken outside, and one of the servers came by to clean off a table that had just finished.  He saw me but didn't say anything!  At least say something to the person sitting down, like you have to order at the bar!  Otherwise, the bartenders who helped me and the runner who brought the food were fine.

I like Tony's Darts Away and I would go back.
Posted by Johnny Diner at 8:50 AM