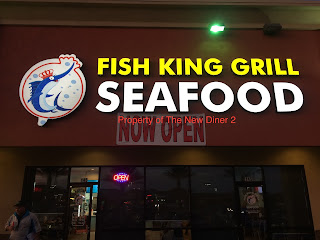 Fish King Grill is across the street from China A Go Go, and has been open for about 7 months. It's a good sized restaurant with about 20 tables as you walk in, and the kitchen and counter straight in front of you.  It's a nice clean restaurant. 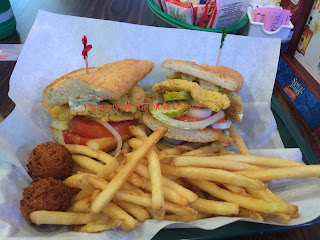 Shrimp po boy, $10.99, fully dressed, lettuce, tomatoes, onions, pickles, tartar sauce, and cocktail sauce.  The shrimp was butterflied and the covered with a cornmeal batter.  I think it was frozen, but it was good and they it's a big portion of shrimp.  The bread had a nice texture and held up well for the sandwich.  Nothing worst than getting bread that just falls apart after one bite.  The fries were great, frozen, but crispy on the outside, and soft on the inside.  The hush puppies were great too!  Maybe on the best I've had.  Guessing it was frozen, but light, airy, bold flavor!

Whenever I go to a land lock state, I wonder how the seafood will be.  But, King Fish Grill was great.  I would go back any time!
Posted by Johnny Diner at 1:33 PM