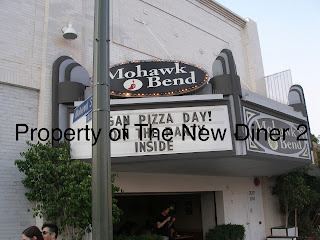 There was a Vegan Pizza Crawl in Echo Park and I decided to finally try Mohawk Bend.  Mohawk Bend is housed in a former theater and one of the owner is a vegan who wanted to have vegan options on the menu.  This is a hipster place.  Not really my style but I don't go to a restaurant to talk to strangers, I go to eat! 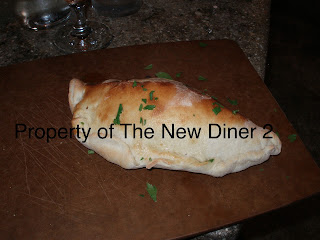 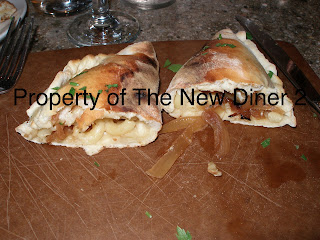 Truffle mac and cheese calzone-$5.  This was disappointing.  There wasn't much cheese sauce in this calzone.  It should have been called a truffle, mac and onions calzone.  The macaroni was well cooked and the onions perfectly caramelized.  The crust was very good, some pizza places could learn from Mohawk Bend on how to make a calzone crust.  But, it was just too dry without any cheese sauce.  They use a cashew cheese on their pizza. 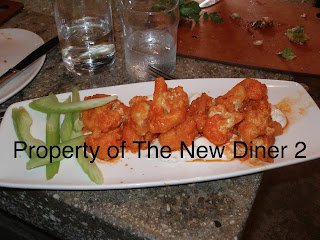 Buffalo cauliflower with vegan blue cheese dressing, $7.  A server brought this to our table by mistake, but it looked so good, I had to order it.  Don't worry, the server took the first order to the correct table.  This was amazing!!  The cauliflower was cooked al dente and had a firm texture and crunch.  The buffalo sauce was amazing, heavy on the vinegar but not spicy.  The vegan blue cheese was great.  I actually thought it was real blue cheese.  A nice cooling contrast to the tangy buffalo sauce.  I would order this again, any time!

Service was good and bad.  Our server was nice and friendly.  But, they had already ran out of one of the vegan pizzas on the menu by about 7pm.  How does that happen?  I know it's tough to predict how many people will be coming but come on, you can run out that soon into the dinner rush.

Speaking of the dinner rush, they seemed overwhelmed by the Vegan Pizza Crawl.  The table next to us waited a full 30 minutes before getting their orders and their order was taken at the same time as ours!  The server kept saying they were backed up, over and over.  I mean this is the second year in a row that Mohawk Bend was part of the Vegan Pizza Crawl and they were overwhelmed??

The calzone was a major part of the reason I went to Mohawk Bend, but it was disappointing and I wouldn't order it again.  But, I did find the buffalo cauliflower to be an outstanding dish and I'm coming back just for that!!  Hopefully, they won't be overwhelmed!
Posted by Johnny Diner at 9:35 AM