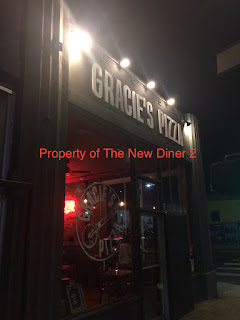 Gracie’s Pizza, is the owner a fan of Gracie Allen?  Anyways, Gracie’s Pizza is about a year old and has been getting good reviews, but I think it's been under the radar in LA's pizza scene.  I haven't found anything written about Gracie's on any foodie blogs or websites.  I found it on yelp, while searching for another restaurant.

A small corner building, Gracie has a few tables as you walk in, a counter along the wall, and the bar and kitchen at the back.  It's a dimly lit room, you wonder if this is a bar or a pizza place. 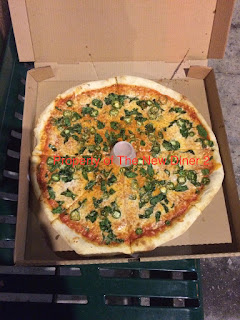 This was a very good pizza, one that deserves to be on any must try list of pizza in LA!  It's a huge pie about 18 inches or so.  Very good, firm, New York pizza like crust.  Folds over well, holds up to the toppings, and good flavor.  The cheese and veggies are fresh.  But, for $4 total, I expected a bit more toppings on the pizza.  There weren't that much spinach at all.

Anyways, I would go back to Gracie's Pizza anytime!  A damn good pizza!