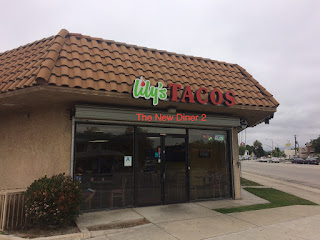 Lily's Tacos has been a Pomona staple since 1992.  David Allen gives a great history about the original Lily's Tacos, which was demolished to make room for another restaurant.  David also reviewed the new Lily's Tacos, which opened about two years ago.  It's a good sized place, where you order at the table.  I'm guessing there are about 10 tables in the restaurant.  Nothing fancy, but you get a good view of busy Garey Ave. 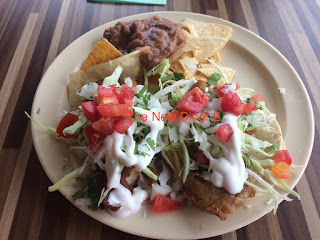 Fish taco-$1.75 with talapia fish used.  On the left side of the picture.  The batter was very salty!  The fish was fresh, as was the veggies, but I just couldn't get over the saltiness.

Shrimp taco $1.75.  The same as the fish taco, the batter is just way too salty.

While both are good sized pieces of seafood, this could be good, if the batter wasn't so salty.

Service is pretty good.  The guy was nice and pretty helpful. But, when I asked do they have another location, he just said yes.  But, he wasn't a jerk about it.  I figured most people will say where the other location is.

I wouldn't go back to Lily's Tacos.  Maybe their other items are better, but their fish and shrimp tacos are not good.
Posted by Johnny Diner at 1:57 PM