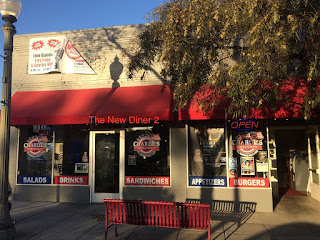 Charlie’s Stars & Stripes American Deli is a sports bar in Upland, that gives recognition to men and women who served in the military.  There are two walls with pictures of service members!  On a wall near the bar, there is a picture of Pat Tillman!  Today being Memorial Day, I decided this would be a great time to do a review.

Back in 2014, I found out about Charlie's after a David Allen Restaurant of the Week mentioned they had a $5 steak night on Monday.  I wasn't eating meat at the time, but I went with a group of people.  I think I had either the fish and chips or a salad.  I can't remember.

Fast forward four years, they moved the steak night to Wednesday, and it is $7.95.  Still a steal. I read there are new owners, and they did do some renovations- they moved the wall dedicated to area service members to the back, mainly because more photos were added.  The names on the menu no longer have military themed names.  The Pearl Harbor Burger is now the Hawaiian burger.

While it says deli in the name, it's not a deli in the classic sense.  Their menu is salads, sandwiches, burgers, and some entrees like spaghetti, salmon, and steak. 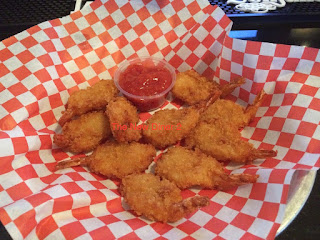 Shrimp basket-$9.99.  Charlie's is a casual bar, so I'm not expecting gourmet food.  The shrimp is fine for what it is.  This is 10 pieces of frozen shrimp. Good sized shrimp with a good crunchy outside.

Service is good.  It was slow, as the entire downtown area has very little foot traffic.  But, I didn't lack for anything.

I like Charlie's and would go back anytime.  If you do eat meat, that steak special is a steal!