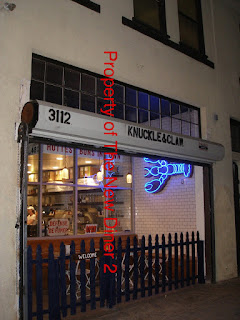 Having tried the lobster roll at Lobster Grill, I searched for another place to get lobster rolls.  I found Knuckle & Claw and decided to head down there.  A little west on Sunset Blvd. of Silver Lake Ramen, is Knuckle & Claw, a small restaurant, that serves up Maine lobster, which they get shipped from Maine everyday.

There is no indoor seating but plenty of outdoor seating.  Tastefully decorated in a nautical theme, Knuckle & Claw is a great addition to the dining scene in Silver Lake. 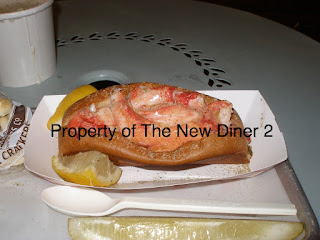 Full Lobster Roll, $18. A 6" roll with 1/4lb of lobster!  Unlike the lobster roll at Lobster Grill, this was all meat, not fillers.  Very tasty, not much mayo, just good lobster meat.  The bun was nice and firm, holding the lobster very well.  A damn good example of lobster roll!  Well worth the price, because you're getting real lobster!

There is a blue crab roll on the menu, but the blue crab is from the Gulf of Mexico, which means it isn't nearly as good as Maryland blue crab!  There is no debating this point! 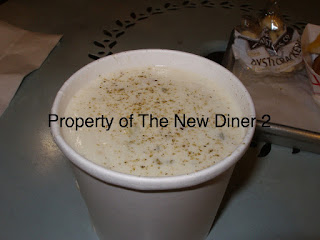 Clam chowder, $9. A good hearty example of clam chowder.  But, a bit thinner than other chowders I've had.  But, lot of clams and potatoes cut into very small pieces.

Service was good.  It was very slow when I was there, only one other customer.  Maybe Silver Lake hasn't found out about this treasure?

Knuckle & Claw is an example of paying for quality.  Yes, the lobster roll at Lobster Grill is cheaper, but you don't get Maine lobster or the amount of lobster as Knuckle & Claw.  I would go back as long as the quality stays the same!