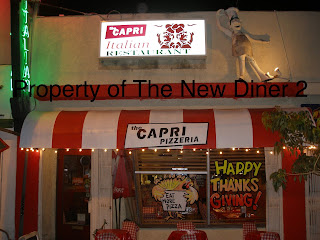 The Capri was featured on the TV show Kitchen Nightmares.  A friend who watched that show wanted to to give The Capri a try.  I didn't search for the episode on You Tube until after I went and tried Capri.  The story goes twin brothers loved eating at The Capri, which opened in 1963, that they bough the restaurant about 20 years ago.  About six years ago, they were struggling and turned to Kitchen Nightmares for help.  They must be doing something right, because they are still in business six years after their episode aired.

The Capri has a lot of competition in Eagle Rock, the 800lb gorilla- Casa Bianca, the now closed Brownstone, and the made famous by Ellen, Big Mama and Papa's are all within two miles of The Capri and that's just in Eagle Rock.  A nice, narrow restaurant with wood accents, and concrete floor, but it was a bit dirty.  This place needed a good cleaning, from the condiment containers to the tablecloth  to the chairs and benches. 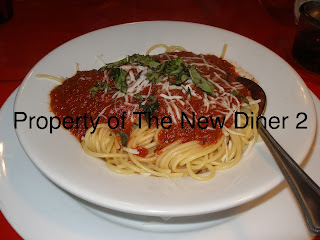 Tomato and basil spaghetti $9. The sauce was fine, good flavor, fresh ingredients, but the pasta was undercooked!  A few more minutes in the boiling water would have done wonders.  Not an outstanding dish, even if the pasta was cooked perfectly, but not bad and a good price.

Service is friendly but slow! You walk in and don't know if it is counter service or table service.  We walked to the counter and one of the twins told us to sit anywhere, even he saw us walking in!  Later during dinner, a couple walked in and he told them to sit anywhere!  Not a major deal, but come on, be consistent!  After we got seated it must have been five minutes before he came to our table and there were only four other people in the restaurant. The food came out quickly, but refills were slow.  The twins were really friendly and would talk about the restaurant.  But one of the twins was sitting down at a computer and surfing the net.  The other was always talking to customers, which is nice, but other customers need attention too.  He talked to us for about five minutes.  He thought it was slow because of the Thanksgiving weekend.  But, when we drove by Casa Bianca, there were ten people waiting outside!  There were about ten people in The Capri, including my friend and I, the entire time we were there!!

After eating at The Capri, I found their episode of Kitchen Nightmares on You Tube.  In the show the twins are portrayed as lazy, that's true evidenced by the dirty, dingy restaurant, even after the show, and lacked cooking skills.  I can't compare how the food tasted before the episode, but the food was ok, except for the undercooked pasta, which happens but really shouldn't at an Italian restaurant. 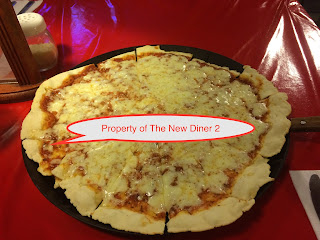 
I went back to Capri to try their happy hour pizza.  Menu price is $8 and while there is nothing on the menu that says the happy hour price is for dine in only, you can only get the price if you dine in!

This pizza was one of the most disgusting pizza I have ever had.  Give me pizza from a national chain anytime over this garbage!  This pizza is basically flat bread crust, some nasty tasting sauce and a good amount of cheese.  This pizza was bland, no flavor and just disgusting!

Service was lazy but friendly.  One of the twins was there and most of the time he was sitting at his table and surfing the net!  This guy is so damn lazy that after giving me the bill, he just stood there about 2 feet from my table and waited until I paid.  He couldn't walk back to his computer, about 5 feet away and come back!

While I say I would never go back to a restaurant because the food was mediocre or bad, I am willing to give them another try.  Usually I regret it and that holds true for Capri.  No way I'm going back to this terrible restaurant again!