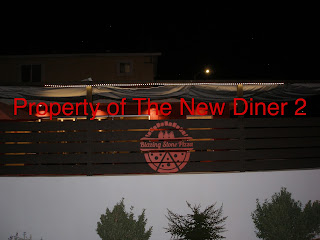 I found out about Blazing Stone Pizza while reading The Eastsider Blog.  They opened back in September with a very interesting story about how Blazing Stone Pizza acquired the building, which used to be a bar!  Now people who live in El Sereno and Montecito Heights, do not have to go to Highland Park or Alhambra for good pizza!

Located on a corner lot, Blazing Stone Pizza has a huge patio area and a small indoor dining area with about eight tables.  At the counter there are pizzas sold by the slice.  They also serve salads, sandwiches, and calzones, along with bottled sodas.

You can choose between three different crusts-hearty-thick robust-fluffy inside and crisp inside; house-basically a medium crust, or LA thin-light, thin, crispy, and three different sauces- red gravy, rustic, and blazing. 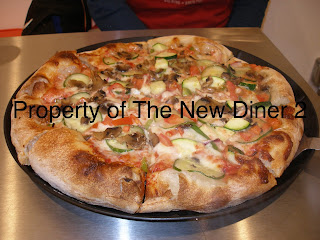 Small Mean Greens, with LA thin crust and rustic sauce, $12, Bell Peppers, Red Onions, Olives, Artichokes, Cucumbers, Tomatoes, Zucchini and Mushrooms.  We asked for no olives and artichokes, and my half came with no zucchini.

I should have read the description better, because I was expecting a New York style thin crust.  This was a cracker like crust-not my favorite, but the crust did hold up to the large amount of toppings very well.  The sauce was flavorful, not one ingredient overpowered the sauce-which I like.  The toppings were fresh and tasty.  I thought cucumbers would be weird on a pizza, but this was pretty damn good!!

Service is very good.  Nice pleasant people who try to please their customers.

I like Blazing Stone Pizza a lot.  I hope the neighborhood supports their new pizza restaurant instead of going elsewhere or feeding the chains!  I will be back soon!
Posted by Johnny Diner at 10:13 AM