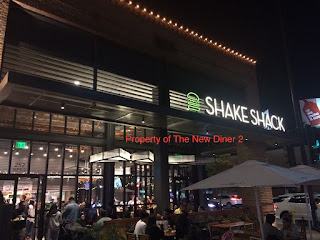 Shake Shack is the the New York based burger chain, that has tried to make a dent into the stranglehold  In N Out has on burger lovers in Los Angeles.

The Glendale location is across the street from the ugly, fake Americana shopping complex.  It's a big restaurant with seating to the right as you walk in.  There are some tables outside too. 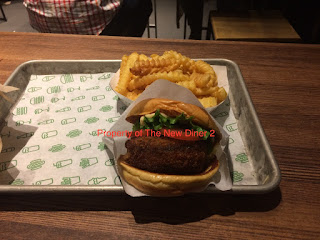 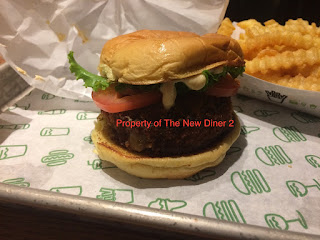 Since I don't eat meat, with the exception of the occasional fried chicken, I tried the shroom burger.  I wish it wasn't deep fried, because portobello mushroom burgers are great!! But, the portobello mushroom is stuffed with cheese and then deep fried.  It was good burger, but not great.  Certainly, not mind blowing.  Yes, I understand the pull for Shake Shack are the burgers with beef. I thought the ShackSauce was pretty good, a combination of ketchup and mayo.

The crinkle cut fries were very good. Nice and crispy on the outside and soft on the inside.

Service was good.  But, the door you enter goes right into the line to order, and they have the lines sectioned off into two parts, but there are three cashiers.  Why not just have one line that is roped. I got into one section and the guy in front of me took forever to order.  The other section two or three people finished ordering before I even got to order.

I don't see what all the hype if about for Shake Shack.  It's ok, but I won't rush back!
Posted by Johnny Diner at 9:15 PM