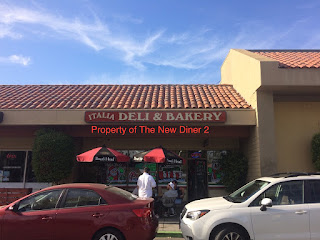 I'm visiting a friend in Agoura Hills and she says Italia Deli & Bakery has great sandwiches.  So, I drop in and pick up a couple sandwiches.  There are a couple tables outside, but it's mostly people picking up sandwiches.  They were very busy and I was shocked at how many people were inside.

It's a decent sized space with the deli counter along the left wall and a few rows of grocery items. 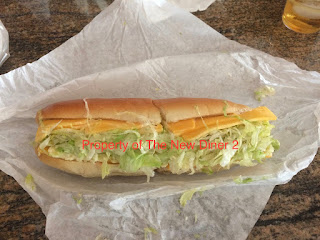 A small assorted cheese sandwich, $8.99 with cheddar and havarti cheese, mayo, lettuce and tomatoes on a soft roll.  A large 12in assorted cheese is $15.49.  You can get a hard roll which is crispy instead.  All breads are baked in house and from scratch!  The items were all fresh and the roll was good-nice chewy texture.  But, this was an 8in roll for $8.99.  They also charge extra for pickles, 75 cents on a small and $1.50 on a large.  They use Boar's Head meats.

Service is good.  My friend called in the order, and I picked it up.  The sandwiches were ready when I got there.  But, the cashier charged me for two large sandwiches, when we got one large and one small.  I didn't realize this until I was walking back to my car.  I went back and the cashier refunded my the price different.

The sandwiches at Italia Deli & Bakery are good quality sandwiches, in a wealthy area, but I just don't think the quality justifies the high prices.  At Capri Deli, a large cheese sandwich is 12 inches, and $9.99.  A small 6in is about $7.  I get that we are talking about two different zip codes, but I just don't think the quality of this sandwich justifies the high prices.