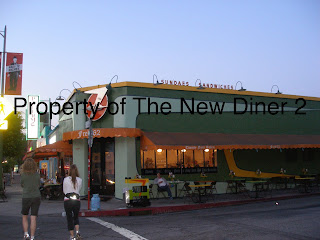 Hello Mc Fly anybody home?  No, Doc Brown didn't turn another DeLorean into a time machine and take Marty back to Lou's Cafe.  But, if you go to Fred's 62 in Los Feliz, you may feel as though you went back to the future!  A really neat old school diner that has been open since, for you slow Cal St. Long Beach graduates, 1962!!  Set on Vermont, just south of the House of Pies, Fred's 62 really does feel like you're going back in time. 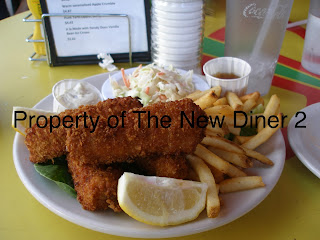 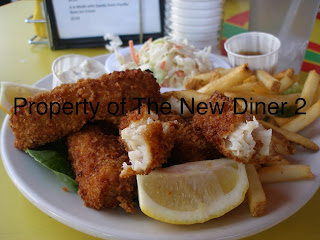 Fish and chips, $11.77.  Four pieces of cod in a Guinness batter, fries, cole slaw, and a small salad.  At first look, I thought the batter would be too thick, but the batter was very light and crunchy.  The dark color has to be from the Guinness beer.  The fish was fresh and tasty.  The portion size was very generous.  The fries were average served luke warm.

Service was slightly below average.  The server was nice and friendly, but didn't refill drinks too often and wasn't around that often.  There was another server inside the restaurant and about three other tables outside, where I was sitting.  So, it wasn't like she was so busy, so didn't have time.

I was surprised at the quality of the fish here and would certainly go back, despite the below average service.
Posted by Johnny Diner at 12:44 PM