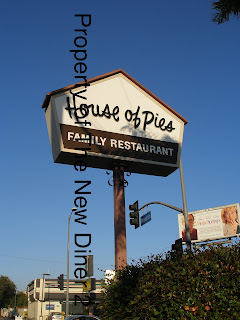 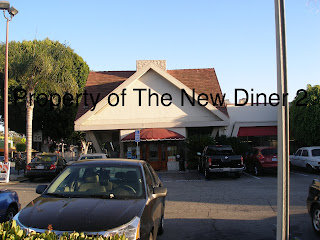 I recently read a story about the Top 10 pies in LA. Two restaurants that I have reviewed were included in the Top 10, but I did order pie at Pie N Burger or Philippe The Original.

While House of Pies wasn't in their Top 10, the writer did mention them as a place they tried while doing research for the story. I have passed by House of Pies often, but never stopped in. But, I looked at their menu, which has a wide variety of items, and decided to stop in. 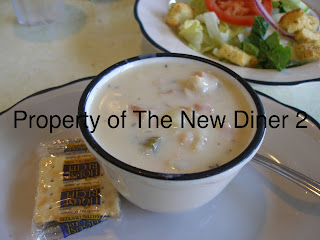 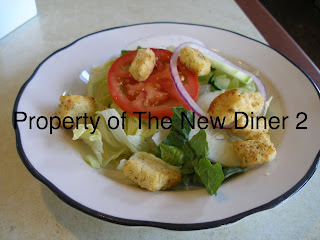 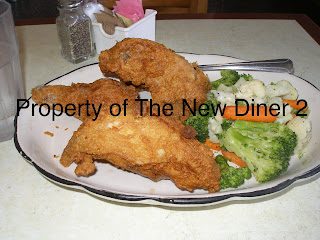 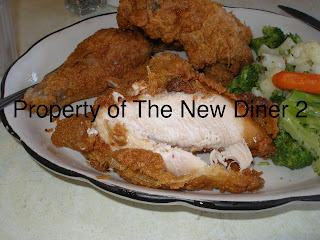 The two side options were potatoes or bread and I didn't want either them. So I was glad to hear they offered a salad and soup as the two sides. The salad was standard issue salad with iceberg lettuce, crutons, tomatoes. Fresh, chilled, nothing great or bad about it.

But, the clam chowder!! WOW, was it great!! The chowder was full of flavor, a rich hearty broth and filled with lots of clams, finely cut pieces of potatoes and just wonderful. I would order this again and I would put this clam chowder up against other seafood restaurant's clam chowder!!

I was excited to see that there was broasted chicken on the menu and I knew that's what I was going to order. But, this wasn't a good example of broasted chicken. The main thing was the chicken was very salty. They must put in a ton of salt. I couldn't get over the saltiness. The other thing I couldn't get over was the greasiness. This was very greasy, the skin was dripping in grease. The skin was fairly crispy but the more bites I took, I kept thinking I was eating Banquet frozen fried chicken. This chicken tasted exactly like it!! The breast portion was fairly juicy. I would not order this again!!

The steamed vegetables had been sitting on the steam table too long. They were dry and mushy and just bad. 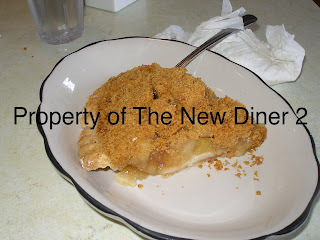 Since I was at House of Pies, I figured I would see how their pies are. I got the Dutch Apple Pie, $3.95. This wasn't good at all and I see why they didn't make the Top 10. The crust was too doughy and mushy, not flaky. The topping was too bland, not sweetness like other Dutch apple pies I've had. The apples were fine and there was a good amount of nut meg and sweetness in the filling. But, the doughy crust and lack of sweetness of the topping just ruined this pie for me.

Service was below average. The lady was all business, not friendly or warm. I felt like a number. I didn't really lack for anything, but I also didn't feel like she wanted to be there.

I was disappointed with House of Pies. The broasted chicken and pie were bad. If not for the great clam chowder, I would never go back to House of Pies. But, the clams chowder is great and I'll return soon.
Posted by Johnny Diner at 10:23 PM