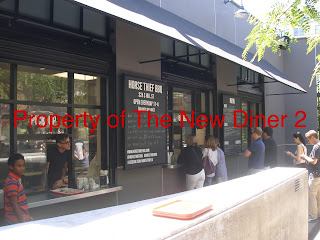 Just as I was disappointed to find Corner BBQ in Glendale, was a kebobs restaurant, I go to Grand Central Market to find a real BBQ restaurant next door!  Horse Theif BBQ opened on July 4, 2013 and had a steady stream of customers when I went for lunch on a sunny Sunday.

Located outside Grand Central Market and right below Angel's Flight, Horse Thief BBQ is a Texas BBQ restaurant.  It's very casual- they serve your food on a tray lined with butcher block paper!  Yes, that mean no plates, paper or otherwise.  There is only outdoor seating on picnic tables. 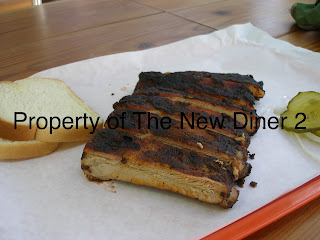 Half rack of spare ribs, $13.  I think these ribs were smoked with red oak.  They were a bit dry, as if they had been leftover from yesterday or sitting too long in the warmer.  The meat was tender but the bark was just off, too much chili power.   The BBQ sauce is a tomato based sauce and also has too much chili powder.

I wasn't too impressed with the ribs here.  I know this is a Texas BBQ, so you gotta order the brisket, but I'm not a brisket fan!  But, the people around me who ordered the brisket really liked it.  So I may come back for the brisket.
Posted by Johnny Diner at 10:34 PM