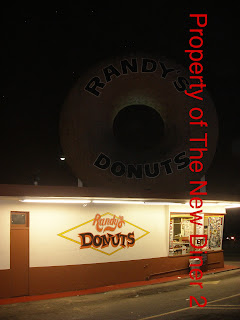 Anyways the only problem with going to Randy's at night is that the huge donut on the roof didn't show well on my pictures. 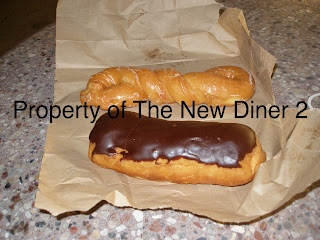 The glazed twist and the chocolate bar were 90 cents each. Both were the standard donut, nothing bad or outstanding about them.

Service was nice. The lady who helped me was very nice, much nicer than most donut shops.

Randy's Donuts isn't a destination donut shop, like Donut Man. It is a place I would go back to, if I'm the area.  They are open 24hrs and when I went, which is clearly at night, they had plenty of donuts ready to eat.
Posted by Johnny Diner at 6:51 PM