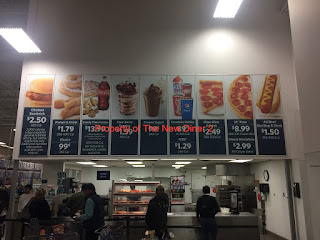 Since I reviewed the pizza at Costco, I figured I would review the pizza at Sam's Club.  The differences in the menu at Sam's Club and at Costco; Sam's sells soft pretzels but do not have any salads and chicken bake.  Many Costcos have added beef chili, brisket sandwich, and a turkey sandwich to their food court menu; none of which are sold at Sam's Club.  Almost all Sam's Club food court are inside the store.  While Costco most of the food courts are outside.  I don't know if non members are allowed inside Sam Clubs so they can go to the food court, but I'm sure any store owned by Walmart only cares about making money! 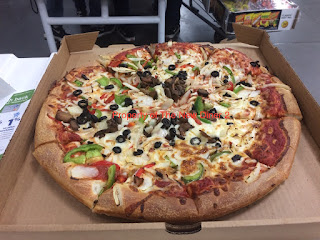 16 in. veggie pizza, $8.99.  The veggies were mushrooms, onions, olives, and bell peppers.  This was ok, but way too doughy.  The crust is just too thick.  The sauce is pretty bland and they could put more sauce on there.  As for the toppings, while they were fresh, there weren't that many mushrooms and most were on a few slices, they did load up on olives.  Yes, the pizza is $1 cheaper than Costco, but it is also 2 inches smaller.  I much prefer the Costco pizza, better crust, better sauce and toppings.

Service was good.  One huge difference between Sam's Club and Costco food courts that are inside the store, is that the line at Sam's is much shorter.  There were only two people ahead of me, and even while I waited for the pizza, there were maybe 6-8 people in line.

I wouldn't get the pizza from Sam's Clubs again.  Costo pizza tastes much better and it's a better value!
Posted by Johnny Diner at 5:50 PM