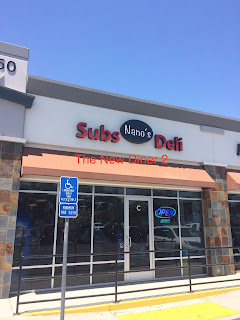 Nano’s Deli has been opened for about two months.  Between a martial arts studio and a Lebanese restaurant, it's a good sized space.  The counter and prep area is to the right as you enter.  In front of the deli cases are different varieties of potato chips, some I've never heard of before.  There are about 10 tables and chairs and the drink dispenser on the left part of the space.

They use Boar's Head meats, and that is made known by the signs and the sticker that is on the paper wrapped around your sandwich. 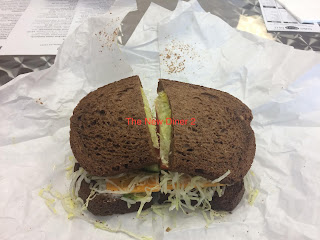 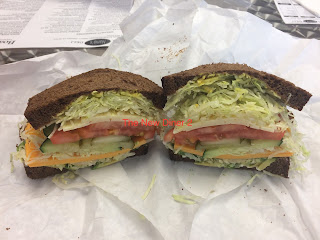 Veggie sandwich, $6.99- choice of bread and two cheeses, mayo, mustard, lettuce, tomatoes, onions, pickles, and sprouts. I asked for no onions and mustard, with squaw bread.  This was a good filling sandwich.  The bread was soft, good texture, and the veggies were fresh.  Two slices of both cheeses. Everything was fresh.

This is such a great option for sandwiches in Ontario!  I saw about ten people who work at Niagara Water, so that must be close by.  I may give Alina's, the Lebanese restaurant next door, since David Allen gave it a good review!
Posted by Johnny Diner at 2:04 PM