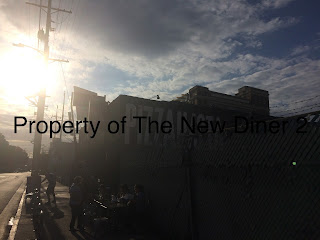 A few weeks ago LA Eater listed 16 places to get a killer slice of pizza in Los Angeles.  Originally Pizzanista was the place I wanted to try, but they don't open until 5pm.  So I tried another one of the places listed; Pie Life Pizza in Pasadena.  So, I finally had a chance to try Pizznista.  They are known for the mac and cheese pizza, but when I saw it, it was all macaroni and very little cheese.

This Arts District location has been open since 2011.  They recently opened another location in Long Beach!  It's a small galley style set up.  There are about 10 tables inside and 5 outside.  The line stretched out to the door, but the pizza slices are behind the cashier.  Not a good set up, if this is your first time.  There isn't a large display menu, the menus are by the cashier.  Great if there isn't a line, but when there is a line, not a good set up.  Almost the music is too damn loud!  It doesn't help that the speakers are on top of the cooler and near the cashier! Turn down the volume or move the speakers higher. 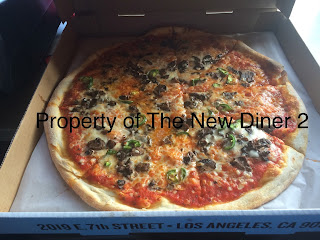 The best thing about this pizza is the crust!  Thin, yet firm and very good texture.  It held up to the toppings very well.  The sauce was mild and flavorful.  While the toppings were fresh and tasty, the quantity was lacking.  There were very few pieces of jalapenos per slice, maybe two! Come on don't be so stingy with the toppings.

Overall I liked the pizza, very good.  But, the small quantity of toppings, especially at $2.50 per topping, was a turnoff and very overpriced!

Service was ok.  The girl working is just going through the motions, almost like a robot.  She forgot to tell me how long the wait for the pizza was going to be, about 25 minutes.

I would go back to Pizzanista, but just order a plain cheese.  The very small quantity of toppings isn't worth the added price. 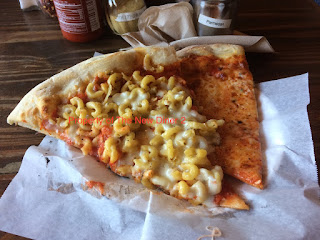 So I went back on a Sunday to try a slice of the mac n cheese pizza, $4.50. It was ok. Not great, mostly because the mac n cheese had very little cheese sauce. It was mostly macaroni, which was well cooked. This combination doesn't mix well for me, but clearly other people like it!
Posted by Johnny Diner at 10:45 AM