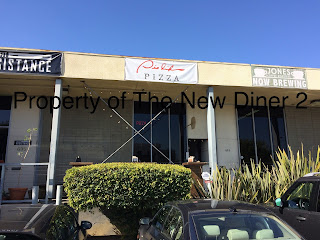 Last week LA Eater listed 16 places to get a killer slice of pizza in Los Angeles.  Now, I'm not a big fan of ordering slices!  I much prefer to order freshly made pies.  You just don't know how long the slices have been sitting out.  But, most places, if they serve slices, they will serve whole pies!!

I have been to seven of the places listed, a few places a different location than the one on the list; Village Pizzeria, Tomato Pie, Vito's, La Rocco's Pizzeria, Town Pizza, Lamonica's New York Pizza, and Mulberry Street Pizzeria.

I have been to two places Barone's Famous Italian Restaurant and Joe's Pizza on Broadway in Santa Monica, but the Barone's and Joe's Pizza listed in the LA Eater apparently aren't related to the ones I went to.

I would have added Garage Pizza to this list and taken out Mulberry Street.

So, I decided to try one of the places on the list.  Since I was in Chinatown that morning, I wanted to try Pellicola Pizzeria or Pizzanista which were close by, but they don't open until 3pm.  A few weeks later, I stopped in at Pizzanista!

So, I went to Pie Life Pizza in Pasadena.  Pie Life has been open for about three months.  It's a very small place, next to a crossfit gym and a very popular coffee shop.  It's basically take out but there are a couple high top tables and one table that can fit four to six people. 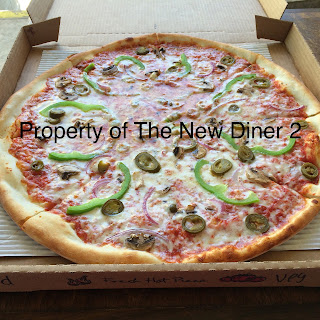 18 in. veggie with mushrooms, red onions, bell peppers, garlic and jalapenos instead of olives, $20.71.  The crust was great!!  Firm, yet chewy and held up to the toppings.  Very good cheese and while the veggies weren't plentiful, they were fresh.  A very good pizza.

Service is good.  The owner is very nice and helpful.  He substituted jalapenos instead of olives without charging!  Which is something I never understood about pizza places.  If they charge a set amount of toppings, what difference does it make if you substituted one veggie for another?

I would go back to Pie Life Pizza anytime!  A very good addition to the pizza scene in the Los Angeles area!!