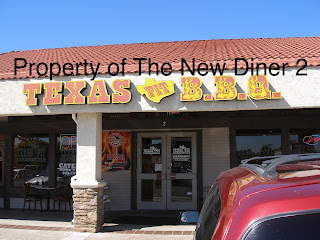 As readers of The New Diner know I am not a fan of pretentious Orange County and especially the BBQ.  I have had some bad BBQ in Orange County.  So I wasn't that excited about trying Texas Pit Bar B Que when I first heard about them.

Anyways, Texas Pit Bar B Que is located in one of the countless strip mall you see all over suburbs.  There are a couple other restaurants in the area, so the parking lot is packed during the weekday lunch time. 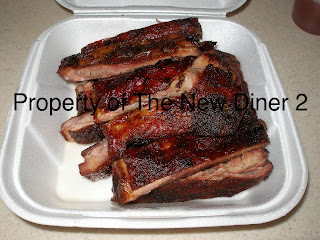 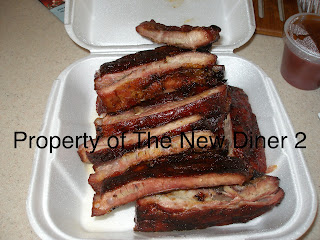 Full rack of St. Louis spare ribs, $17.99.  When I walked out of my car the wonderful smell of BBQ filled the air.  So, Texas Pit Bar B Que had some promise.  But, the ribs were too tender and mushy.  They should have been taken off the smoker 30 minutes earlier.  The meat had a nice bark and BBQ flavor.  But, just way to mushy.  This falling off the bone BS for BBQ is for stupid people who don't know anything about BBQ.  The actual bones shouldn't be so soft that somebody can bite into them, which I did.  But, this had potential and could have been a good example of BBQ.

Service was OK.  I was greeted when I walked in.  Too bad she wasn't the one helping me.  The other young lady who took my order, was just going through the motions, not listening to me.  I just wanted a rack of ribs ala carte, not the dinner.  She wasn't helpful or friendly at all.

Frankly I was surprised at how close Texas Pit Bar B Que came to making good BBQ.  They missed but was close and didn't try to pass off BBQ as something cooked in an oven.  I wouldn't rush back and even if I was in the area, I may have second thoughts about going, but I would give them a second chance.
Posted by Johnny Diner at 2:36 PM