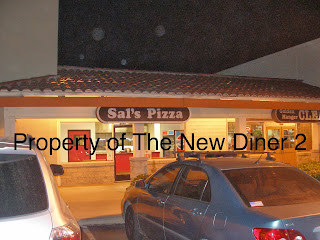 I have reviewed other pizza places with the name Sal's somewhere in the business name; Two Sal's in Montebello-which is now closed, and Sal's Pizza and Bagelry in La Verne.  Now, you're reading about another pizza place with Sal's in it's name; Sal's Pizza.  I found out about Sal's Pizza from a comment by Mr. T, no not that Mr. T of A-Team fame, to David Allen's review of Red Devil Pizza in La Verne.  You can read my review of Red Devil Pizza.  On a side note, Who knew that La Verne had so many pizza places?  Some very good- Pizza Barn, some pretty good- Red Devil, and some very overrated- Warehouse Pizza and Sal's Pizza and Bagelry.  Anyways, I invited David Allen, who had never been to Sal's Pizza in Alta Loma, and we had a nice chat about the dining scene in the Pomona Valley.  David has posted his review of Sal's Pizza.

Sal's Pizza is a small take out and delivery place.  There is no place to sit down and eat at Sal's.  So, David and I, went to the Del Taco in the same shopping center, ordered a soda and feasted on Sal's pizza!  The menu states Sal's has been serving Rancho Cucamunga and Upland since 1979, and I understand they moved to this location in Alta Loma about ten years ago. 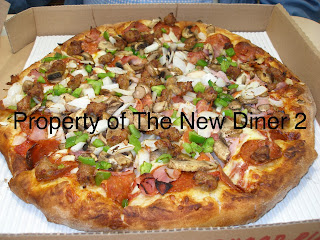 Medium Sal's Special pizza, $16.25, pepperoni, sausage, ham, bacon, green peppers, onions, mushrooms.  The crust was very good, nice and firm on the outside and chewy inside, and held up to the large amount of toppings on the pizza.  The sauce was mild and added to the pizza but did not overpower it.  The meat toppings were great, though I didn't taste much bacon-must have been bacon bits, but good quality.  The veggie toppings were fresh and plentiful!

Service was good.  The guy, I think he is the owner, who took the order was nice and friendly.  The pizza came out quickly and hot.  They included a coupon with the pizza, $2 off on Monday, Tuesday or Thursday, and $3 off on Wednesday.  Nice touch, because I'll use it again.

I enjoyed the pizza from Sal's Pizza and would go  back more frequently, if I lived close by.  I had a very enjoyable dinner with David Allen, but sadly the BBQ place at Vineyard and Football, which he thought was ran by the owners of the now closed Red Hill BBQ, is closed!