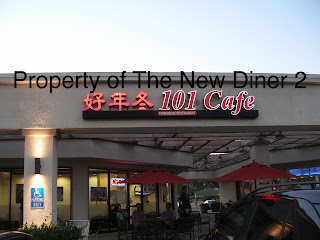 101 Cafe is located next door to Mr. G's Pizza, and is a Taiwanese restaurant.  What is the difference between Chinese and Taiwanese?  To be honest, I'm not sure.

101 Cafe is a fairly small restaurant with about ten tables inside and a few table outside.  It wasn't busy when I walked in on a Saturday night. 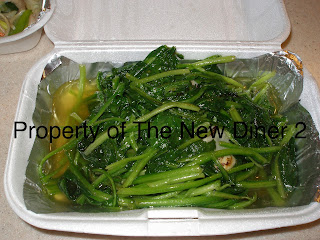 Sauteed spinach, $7.95.  This may have been the best dish I ordered, even tough it was a very small portion.  The spinach was cooked perfectly.  But, was bland and lacked flavor.  It was a bit put off by the clear liquid that was as thin as water.  Put some corn starch and thicken that liquid!  I was also put off but the large slices of garlic in the spinach.  I love garlic, but come on, cut it into smaller pieces! 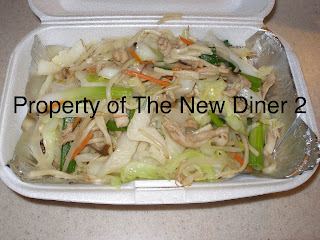 Chicken chow mein, $6.50.  Again, very bland and lacking flavor and it's white.  Where is the soy sauce?  Not only would it add flavor, but it would look at chow mein from every other Chinese restaurant I've been to!  Again, a small portion and not worth the price. 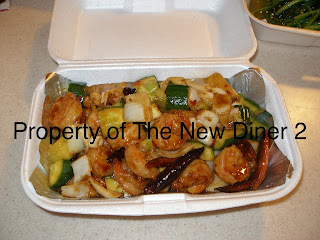 Kung pao shrimp, $10.95.  Finally a dish with some flavor!  But, it wasn't spicy at all, even though there were the dried chili.  What was missing was a good amount of shrimp.  They small number of shrimp that was in the dish were cooked perfectly but I have a feeling the shrimp was frozen, because it wasn't as fresh as it could be.  Now, there were too many fillers, like huge pieces of zucchini and huge slices of garlic.  Portion size was not worth the price!

Service is pretty good.  The guy who took my order was nice and helpful.  My order came up quickly.

If 101 Cafe is an example of Taiwanese food, I'll still to the Chinese food at Diamond Palace Seafood Restaurant!  Hell, even white washed Chinese food at Mandarin Taste, is better than 101 Cafe.
Posted by Johnny Diner at 10:33 PM