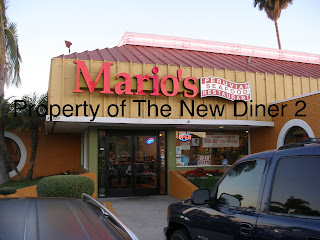 I enjoyed my first and only Peruvain dining experience at Choza Mama, so I've been on the look out for other Peruvian restaurants. I found Mario's and many friends told me it's a must try.

The Mario's I found was in Hollywood, but I soon found that they have a location in La Mirada, so I went there. Well, I tried to go there for lunch, but on a Tuesday afternoon they were closed for the day, due to renovations. I called about 10am and nobody answered and there was no answering machine, so I just figured they weren't opened until 11am. I head down there to find a sign that said closed for the day. I really wish they had an answering machine and they left a message about the closure.

Anyways, I'm not one to hold grudges, so I went there for dinner. But, this time I called, somebody answered, so this wasn't a wasted trip!! 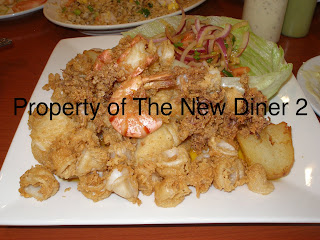 Jalea De Mariscos $15, fried red snapper, shrimp, and squid with onion salsa and tartar sauce. The batter for the fish and shrimp was light, yet crunchy and well cooked. The red snapper was fresh and tasty. The shrimp still had the shell, which isn't what I expected, but the shrimp was fresh.

But the batter for the squid was too thick and heavy. The squid itself was good, pretty fresh, not too chewy. But, the batter ruined it for me.

Overall I liked this dish. But, only three medium sized shrimp? Come on, either decrease the size of the shrimp and increase the portion or tell us that there is only three pieces of shrimp. 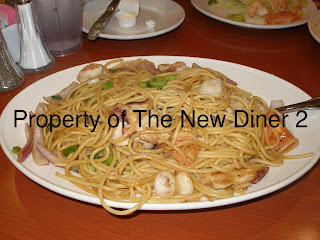 Tallarin de mariscos-$12.25, shrimp, squid, octopus and pasta, onions and tomatoes. This was a very good dish. The pasta-spaghetti was cooked perfectly, the seasoning and spices were right on. The seafood was fresh. If I had one complaint, maybe the small portion. 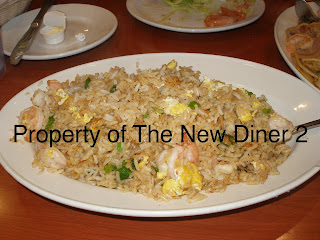 Service was pretty good. It's a big restaurant, I'm betting it used to be a Coco's, and there were about ten tables filled with hungry diners. But, I had to ask for refills on water and our server wasn't around that often.

I did like the food at Mario's but I wasn't blown away. I thought that the prices were a bit high for the portion size and even the quality of the food. I won't rush back to this Mario's or their Hollywood location.
Posted by Johnny Diner at 9:09 PM