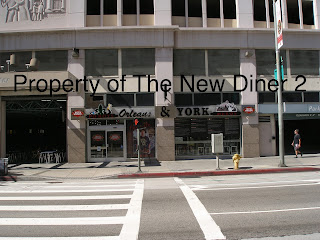 Orleans & York Deli has been on my bucketlist of places to try, but I found Little Jewel, and since I was nearby, I went there first to try their shrimp po boy- very good!!  So I finally went to Orleans and York, their downtown LA location.  I understand they also have locations in Inglewood, Windsors Hills-on Slauson, and they are opening one in Carson soon.

Orleans & York tries to combine New Orleans style sandwiches with New York style sandwiches.  Their downtown location is on Spring-a one way street, there is street parking and paid lots nearby.  Orleans & York is a small restaurant with a long refrigerated section- stocked with drinks, salads, and other items.  There is counter to sit, and tables outside, in a breezeway between the restaurant and a bank. 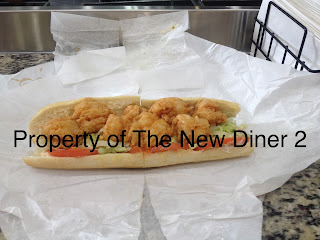 Shrimp po boy, $11.49, mayo, lettuce, and tomato.  The shrimp is huge, they must use jumbo sized shrimp!  It's lightly fried in a well seasoned battered.  Very good and filling.  The roll is soft with a very good texture!  The lettuce and tomatoes are very fresh.  A great sandwich and worth the price!!  I do wish they would put pickles like Little Jewel and how most po boys in New Orleans are served!

If you can put up with ok service, Orleans & York has the better po boy than Little Jewel, and about $2 less, with bigger pieces of shrimp.  I would go back despite the below average service.
Posted by Johnny Diner at 3:03 PM