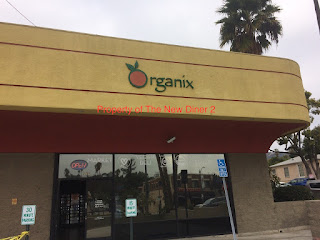 I have reviewed many restaurants on Colorado Blvd. in Eagle Rock; Cindy's, Eagle Rock Public House, CaCao Mexicatessen, Meea's, Larkin's, Brownstone Pizza, both of them are now closed, Oinkster, Colombo's, Casa Bianca, Blue Hen- which recently closed. When I heard that Organix had the Mac Daddy, a vegan Big Mac, just like Doomies Home Cookin, I decided to make a trip to Eagle Rock.

Organix is located across the street from Meea's and a couple doors east of, the now closed, Blue Hen, in a strip mall next to a Chinese restaurant restaurant. It's really a vegan grocery store, that has been opened for six years.  With Sprouts opening up about a mile away, I wonder how long the grocery store will stay open.  But, Organix has a good sized vegan menu.  There are vegan burgers, chicken, even fish, on the menu.  There menu also says no substitutions or modifications.  WTF is this?  The vegan version of that jerk Sang Yoon and his overrated Father's Office? 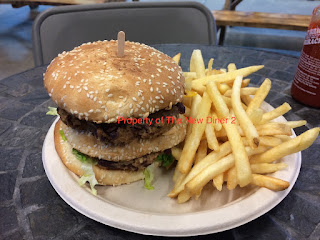 Mac Daddy, $11, a la carte, bean pattie, special sauce, lettuce, vegan cheese, pickles, onions on a sesame seed bun!  This was a very dry burger.  The patties were mushy, and just the wrong texture.  They have whole pieces of kidney beans in the patty.  Why they left whole kidney beans, instead of mixing them up, I have no idea.  While there was some vegan thousand island dressing, there wasn't enough.  While this burger is huge, the taste and quality of the burger isn't there.

Service was ok.  The guy at register just goes through the motions.  He's not friendly or personable.  He was on his phone most of the time I was there, only stopping to take my order and get my food.
Posted by Johnny Diner at 4:05 PM