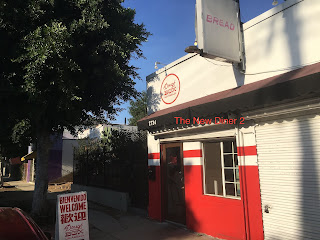 Back in 2016 I went to Dough Box Pizza & Bread, when they were a take out only business, using a commercial kitchen.  They would open up a brick and motor restaurant a few miles away.  Recently I read on LA Eater, they were going to close by the end of the year.

I always take these closing notices with a grain of salt.  In late 2017 to early 2018 they wrote that Twoheys would going to close.  Then they wrote they are going to move to South Pasadena.  Yet, here we are in 2019 and they are still at that same location.  The South Pasadena building, the last time I went by, looks at least 2-3 months away from being able to serve the public.

Anyways,  Dough Box Pizza & Bread is really, still a take out place.  There is one small counter with no seats, for people to eat. 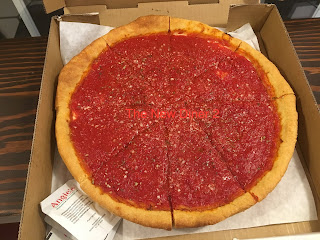 On their Instagram page, Dough Box had a large cheese pizza for $20, to celebrate National Cheese Pizza Day!  This pizza is called the Soto on their menu.  I liked the crust, well balanced, flaky, and held up to the toppings.  There was plenty of cheese.  But, the sauce is still too tangy for me tastes.  They need to balance the sauce with some sweetness! 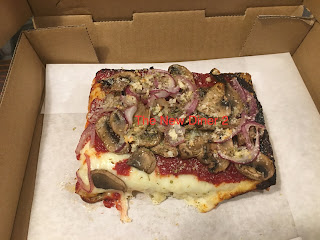 One thing I didn't know, was that Dough Box Pizza & Bread had Sicilian slices!  I decided to give a slice a try.  This was terrible.  The trust was too hard and the sauce was so tangy.  The toppings were fine.

Service was ok.  They told me after I ordered, it would take 1 hour and 10 minutes for the pizza to be ready.

I won't go back to Dough Box.  I only went to see their brick and mortar location.  But, the pizza isn't good. 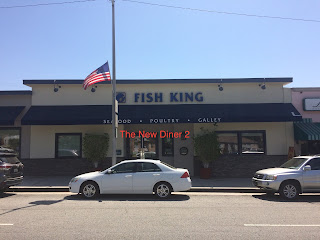 A friend told me about Fish King in Glendale. She liked the grilled fish she got.  So, I decided to give them a try!  Fish King has three sections to the store/restaurant.  You walk into the fish market- you can get fresh seafood- to the left is their sushi department.  They make fresh sushi and rolls.  To the right is the galley- where you can get fried or grilled seafood.

There are tables at the sushi and galley.  It's a casual setup, with the food served in paper boats, and paper plates. 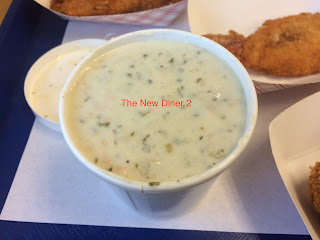 Calm chowder bowl- $5.95- Very thin and runny.  A decent amount of clams and potatoes.  There is no bacon in this clam chowder.  They could thicken the chowder and add a bit more seasoning.  A small portion for a bowl! 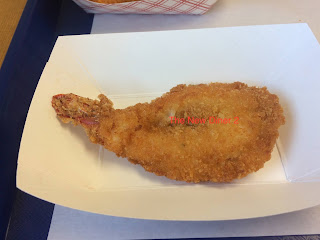 Crunch Jumbo shrimp- $3.25.  The thick batter is the same as the fish and crab cakes.  This was about 75% shrimp and 25% batter. Along with the other fried items I ordered, they weren't fried to order.  They were cooked and sitting under heat lamps. 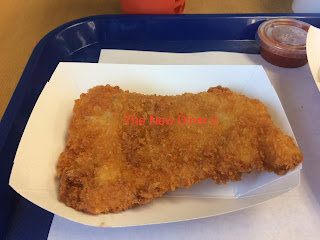 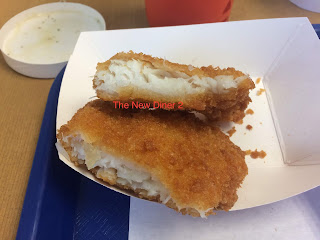 Crunch fried fish-$3.95- The fish used is cod.  But, this also lacked seasoning and the batter was too thick for the amount of cod.  I'm guessing 65% fish and 35% batter. 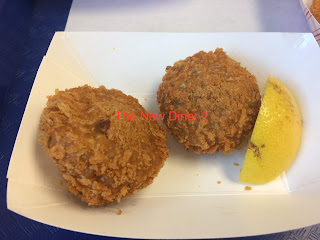 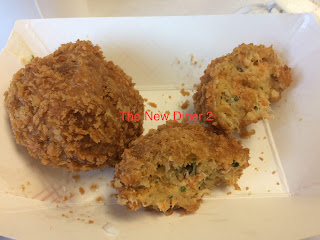 Service was very unfriendly!  The lady who took my order never smiled and had a mean look on her face the entire time.  Not very welcoming.  I was shocked when she politely answered my questions. The food arrived in a good amount of time.

I may go back to King Fish to try their grilled fish and sushi. I wasn't impressed with any of their fried seafood items. Yes, another Vegan Big Mac review!  I heard about Munchies Vegan Diner on Instagram.  I decided to give them a try during the Labor Day Weekend, after reading parking is hard to find at times.

It's located in McFadden's Public Market, along with four other food stands, and an arcade/bar upstairs.  Parking wasn't bad, paid street parking, but on a regular weekend, it would be tough to find. 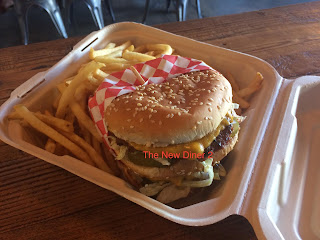 Munchies Vegan Diner calls their Big Mac the Big Munch.  They use the Beyond Burger patties.  This was a huge burger, good flavor, the pickles stood out the most, but their sauce was kind of bland.  Fries were ok. 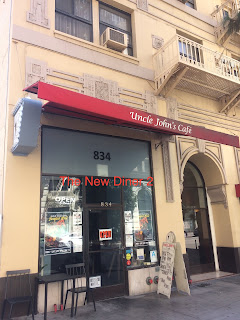 I found out about Uncle John's Cafe on You Tube!  Uncle John's, located inside the Stillwell Hotell,  is part diner and part Chinese restaurant.  You can get both menus from open to close, which is 3pm.  At 5pm, they became Downtown LA's answer to Boiling Crab, it becomes a Cajun seafood place.  I knew this would be Americanized Chinese food.

The restaurant is a small galley-like setup- with tables in the front, a counter at the back, and the kitchen in the far back.  It's got an updated decor. 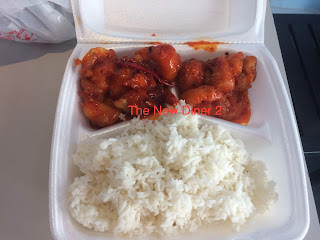 Spicy Shrimp lunch special- $13.50. This was terrible.  I originally order kung pao shrimp, but got this spicy shrimp instead.  I wasn't going to wait and said it's fine.  This is just an orange chicken sauce with shrimp.  The sauce was bland with little flavor.  The shrimp was deep fried and I'm betting it was frozen.  The rice was the best part of this dish. 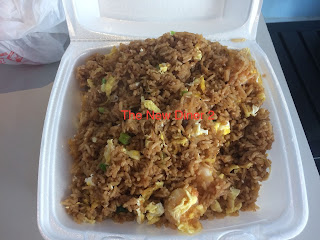 Shrimp fried rice- $10. As you can see, they put a ton of soy sauce into the rice.  There are green onions, and eggs in this.  A bit salty, but overall average.  I've had better, I've had worse. 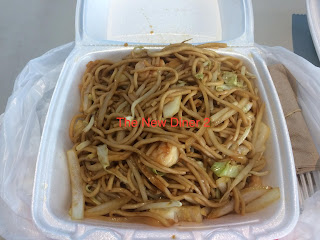 Shrimp chow mein-$11.  Large pieces of onion, some cabbage, and about six medium sized shrimp were in this dish.  It was too greasy for me. I would rate this average, again.

I wouldn't go back to Uncle John's Cafe, for the Chinese food.  I am going to go back for their seafood. 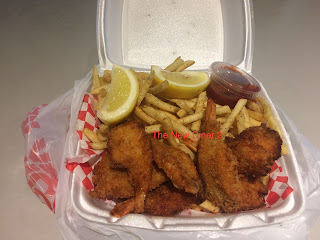 Butterfly fried shrimp, with lemon pepper fries, $12. This was frozen butterflied shrimp.  Some pieces looked as though they stuck together while frying.  Nothing special, but there were about 8-10 pieces of shrimp.  The fries were bland and flavorless! 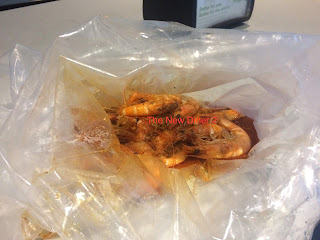 Shrimp with mild house sauce- mixture of Cajun, lemon pepper, and garlic butter sauces- $15/lb. The shrimp were fine, the sauce was pretty good, the garlic butter stood out the most.

I was surprised when I walked in, there was nobody in the restaurant.  A group of three people came in about a minute after me.  Then two people came in about 10 minutes later.  Maybe people haven't gotten the word that Uncle John's Cafe has a seafood boil at night.  Or, since this was Labor Day weekend, everybody was going out of town!  I would go back for the seafood boil.  I thought the shrimp was fine.  I wouldn't touch the fried shrimp again.
Posted by Johnny Diner at 12:36 PM 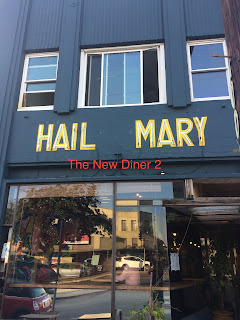 After going to PoeWow Pizza , after seeing it on LA Eater's list of the 22 Essential Pizza in LA, I decided to go to another pizza restaurant on the list- Hail Mary Pizza, this is number 12 on the list.  Pizza of Venice, Triple Beam, Grimaldi's, Prime Pizza, DeSano Pizza Bakery, Settebello Pizzeria, Vito's, Pizzeria Mozza,  Casa Bianca, and my favorite pizza in LA- Village Pizzeria!  Only ten more places to go!! 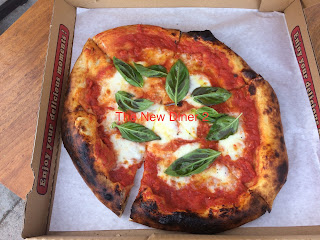 Margherita pizza $12- This was a 13in pizza. If some of this pizza wasn't burnt, this would have been a very good pizza.  But, the burnt pieces and a little too much olive oil ruined it for me.  Fresh ingredients, good crust- the parts that weren't brunt.  But, if you're going to be on the 22 Essential list, you can't make this mistake.  I would much rather go to Elios Wood Fire Pizza!

Like I said, if they didn't burn some of the crust, this was be a good pizza.  But, they got only one chance, and I won't return. 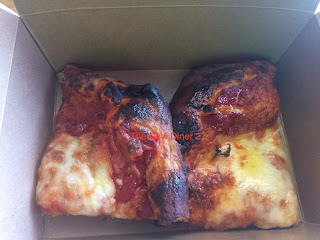 Again, that same burnt crust, and a weird tangy taste that just ruined this pizza.  You can get a better and bigger slice of pizza at Costco!!

I will not be going back to Hail Mary Pizza again!
Posted by Johnny Diner at 8:23 PM 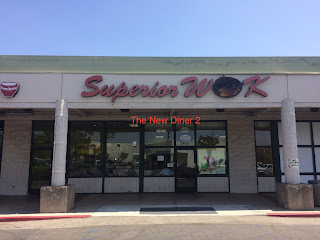 I was going to Kim Tar, but then I noticed that the Teddy's Tacos building has been torn down.  As I walked over I noticed Superior Wok, which is near Superior Grocery store.  So, I decided to give them a try. The interesting thing is that Kim Tar and Superior Wok both have City of Industry addresses, but Teddy's Tacos has a Hacienda Heights address-all three are within a 25 yard radius of each other! 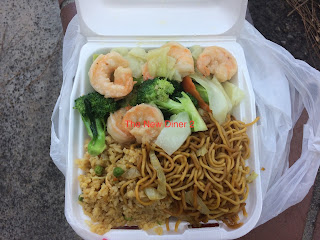 One item combo ($5.39) with chow mein and fried rice with shrimp and vegetables ($1.75 up charge) The chow mein was good, with cabbage and soy sauce.  The fried rice was clumpy, they need to use day old fried rice.

The veggies were good, with a nice crunch and good sauce.  The shrimp, you get six medium sized shrimp, was ok.  Not as fresh, and they were mushy.

I wouldn't go back to Superior Wok.  If I'm going to pay an upcharge, the seafood better be damn good.  This came up short. 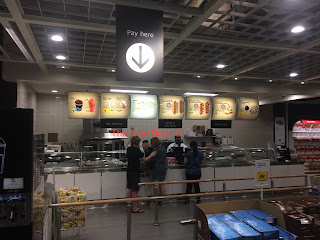 Anyways, I went to the IKEA food court, where they have hot dogs, soda, pizza, and some other treats.  IKEA also has a dining room where they serve salmon, meatballs- both vegan and with meat, and other items.  I didn't go there. Veggie hot dogs- 75 cents each. They come with mustard and some cabbage, but I asked for mustard only.  This was shocking good!  Good flavor and texture on the veggie dogs.  I'm not sure if they are vegan, but man a good veggie hot dog. 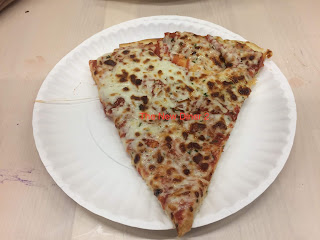 Cheese pizza slice, $1.75.  Ok I actually saw the worker take a whole pizza out of the freezer, take off the wrapping and put it into the oven!  The one in the oven already, he actually forgot to take off the cardboard, so he had to put the pizza back into the oven!  Anyways, I waited maybe five minutes for the pizza.  It was fine.  Look, I'm not expecting a great pizza.  It was certainly better than that chain papa john's, owned by that racist idiot.  But, IKEA's pizza isn't as good as Costco pizza.

I would go back to IKEA for the hot dogs, and will try their dining room items. But, I'll pass on the pizza.