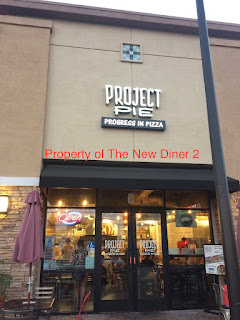 Project Pie is another contender for the "Subway" like pizza along with Blaze, and Pieology-which I thought I have reviewed but I haven't.  So, I have now reviewed Pieology!  A good friend loves Project Pie, so I decided to give them a try.  David Allen also reviewed Project Pie, recently.

Project Pie has three locations so far.  The Chino Hills location is in the Commons, where I reviewed, the now closed Pei Wei, and The Boiler. It's a small sized restaurant with a few tables inside and a couple tables outside. 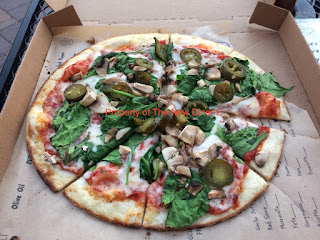 Build your own pizza, $9.13 with tax, with mushrooms, spinach, and jalapenos.  The crust was a bit too hard and tough for me.  The toppings were all fresh and they cut the jalapenos into thicker pieces than other places, which is great because that spiciness really comes out!  The sauce was a bit bland and I wasn't a fan.

Of the three places I've tried, Blaze and Pieology, Project Pie is my least favorite.  The crust just didn't do it for me.
Posted by Johnny Diner at 8:58 PM 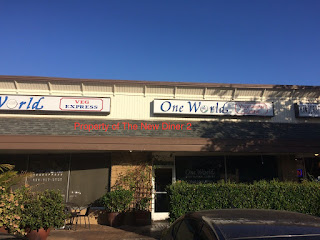 If the address of One Veg World looks familiar, it should, it is a few doors north of the now closed, Chicken Box- a very good place for broasted chicken!  Chicken Box is now a Mexican restaurant.  One Veg World recently celebrated their 13th anniversary.   They also have a location in Pasadena!

The restaurant has two units in this complex.  The unit where you enter is the market and to-go orders, with a few overflow tables.  The other unit is for their main dining room.  A good sized restaurant, but they need to fix the air conditioning!  They had 3 or 4 fans on trying to cool the place off in no warm day! 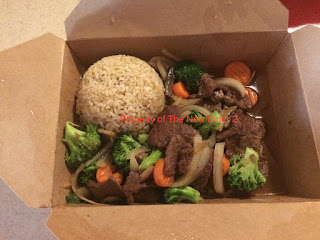 Teriyaki and broccoli, side of brown rice, 8.50.  A very good dish.  The brown rice was cooked perfectly.  The veggies, including broccoli and carrots were cooked crisp but tender.  The meat was a very good example of fake meat.  It tasted exactly like beef, the only difference is the texture, which is a bit chewy.  The portion was a bit small, but otherwise a very good dish. 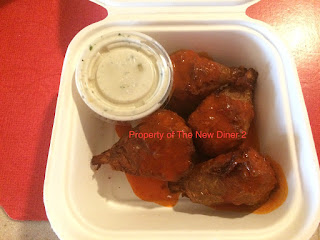 Service was below average.  While the young lady helping me was nice, she was just "off."  She was behind the register and she asked if I wanted to dine in or take out.  I said take out.  She said I can take your order here.  Good start.  I go there and she said do I know what I want.  It's my first time there, how the hell am I suppose to know what you got.  She makes me go to the hostess stand and get a menu. Great service there!  That's like making the customer get his own silverware or drinks!   I place my order and pay in cash.  She completely forgets to give me my change!  I tell her, I need my change!  It seemed as if her attitude was I was going to leave the entire amount of change as her tip!

They need to train her better or she needs to improve her attitude. She should get the menu for me or they should leave a menu at the take out counter.

While the food was impressive at One Veg World, the service wasn't acceptable and a turnoff.  I wouldn't rush back here!
Posted by Johnny Diner at 7:49 PM 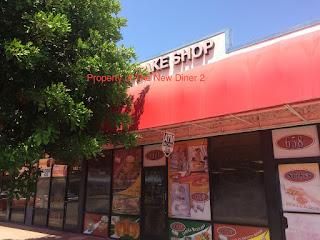 Almost two years ago, David Allen review Spike's Cake Shop and raved about their Mexican food and sweet cakes.  I'm sure the tree that blocks the signage for Spike's Cake Shop grew much larger due to the rains we got this winter!

I have been meaning to give them a try but never made it until today.  Hidden away in a strip mall with a Burger King and other small businesses, Spike's Cake Shop used to be Spike’s Teriyaki, so when the current owners took over, the decided to take down teriyaki and replace it with cake shop.  It's weird setup with tons of Mexican sweet breads and cookies on one wall of the store, then the counter where you order.  There are a few stools to dine in but it's mostly a take out place. 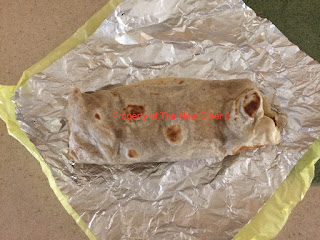 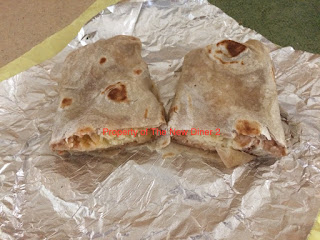 Bean, cheese, rice burrito, $4.37 with tax.  I figured I would do a comparison to Juanita's and see who had the better bean, cheese, and rice burrito.  The burrito at Spikes is made with a fresh tortilla and decently flavored beans and rice.  There was some cheese in the burrito, but not an overwhelming amount.  This was a bit dry and could have used some sauce, which I wasn't given any.  Or maybe I had to pay extra for sauce.  While Spike's is a bit more expensive, it is better and just a bit bigger than Juanita's. 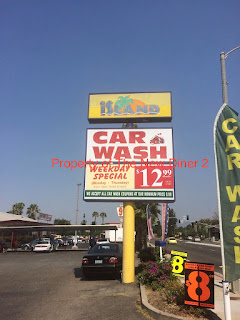 No, the New Diner 2, hasn't turned into a review of anything and everything.  While getting my car washed at Island Car Wash and I was looking at David's Allen review of Grizzly's Biscuits and Donuts, and then I decided to give them a try.   My review of Grizzly's.

But, I decided to take a picture and review Island Car Wash because of the terrible service they provide.  Now, let's me be clear, the people who handled my car were great.  From the person who greeted me and asked what type of car wash I want, to the people drying the car, were top notch.

I am writing about the terrible service provided by that lady at the register!  When I first got to the register she is on her phone texting.  Then she had the nerve to continue texting while I'm right in front of her.  She had to be blind or stupid not to notice me.  Finally she gets off the phone and never says one word except the price of the car wash.  I'm guessing this lady is the owner or the wife of the owner because any owner worth a damn would not allow for such terrible customer service.

I would never go back to Island Car Wash because of the terrible service by this lady at the register!
Posted by Johnny Diner at 8:46 AM 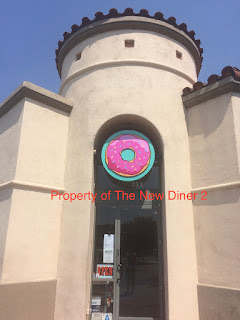 David Allen recently reviewed Grizzly’s Biscuits & Donuts, so I decided to give them a try.  Grizzly's is an upscale fresh donuts place in the Claremont Village.  They have all different types of donuts, which start at $2 and I saw a couple at $4.  Now some people may gasp at paying $2 for a regular donut, but remember Donut Man charges $4 for their fresh strawberry and peach donuts! 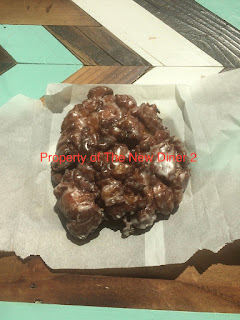 Tangerine, ginger fritter, $4.- This was a terrible donut and a waste of $4.  The donut was hard and chewy and had only a hit of tangerine and ginger flavor.  You're better off going to Donut Man and getting their apple fritters for $2, about twice the size and half the price! 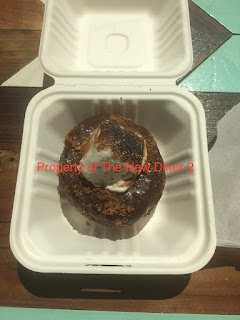 S'mores donut- marshmallow, chocolate, over a cinnamon donut, $3.50.  This was a good but overpriced donut.  It's a neat thing to try once, but not so outstanding that I would order again.

Service was OK. Nothing outstanding and nothing bad.  But, they did charge tax on the donuts.  Now, every donut store I've been to, there hasn't been tax.  Maybe the tax laws changed?

Hipsters, douchebags, and pretentious jerk people make like Grizzly's, but I wouldn't go back to Grizzly's again!  The donuts are overpriced and average at best!  Make the drive to Donut Man!
Posted by Johnny Diner at 11:36 AM 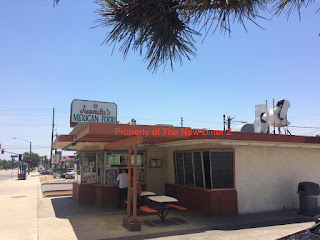 Juanita’s is a Pomona institution, having been in business since 1976.  This location replaced an old  Tastee Freez, which opened around 1956.  Thanks to David Allen for the history of the location!

Juanita's isn't authentic Mexican food, but it's been around and loved forever.  Besides their food, Juanita's was known for the old menu board that listed all possible combinations of filling for their burritos.  Now they have a much more streamlined menu board. 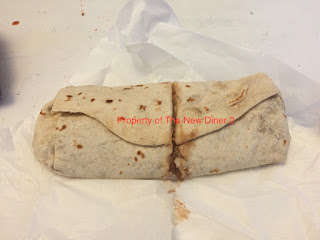 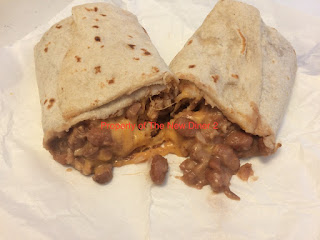 Beans, rice, and cheese, burrito, $3.81 with tax.  The burrito was huge and worth the price.  But, the burrito was very bland.  No flavor and just boring.  Even their hot sauce didn't add much flavor.  The freshly made tortilla was the best part of the burrito!

Service was great!  There was a couple who ordered before me, that I later learned were regular customers.  I was treated just as well as they were, me a first time customer!  I hate giving bad reviews on the food, when the service and people are so nice.  But, the food just didn't do it for me.  But, the service was top notch!

I will go back to Juanita's to try their veggie and potato tacos, but I'll pass on the burrito!

So, I went back to Juanita's to try the veggie taco and potato taco! 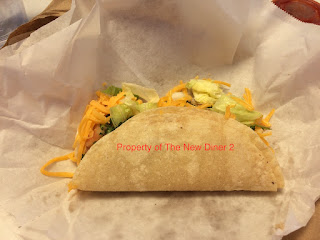 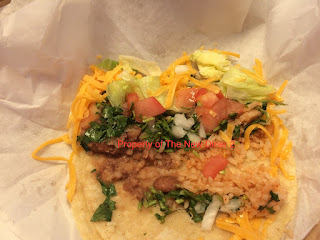 Veggie Taco, $2.10, with beans, rice, onions, lettuce, cheese, tomatoes and cilantro.  This was very good, a bit surprising because everything in the taco was in the burrito.  But, this taco had better flavor and I would order it again.  A bit heavy on the cilantro, but other wise very good. 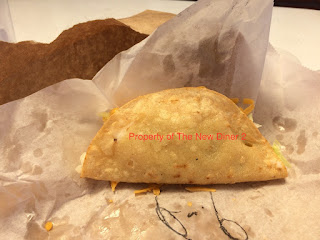 Potato taco, $2.10, fried taco with potato, lettuce, and cheese.  This had a very thin coat of potato and then stuffed with lettuce and cheese.  It was ok, but the veggie burrito was much better!

If you're a vegetarian, the veggie taco is the way to go at Juanita's.
Posted by Johnny Diner at 4:17 PM