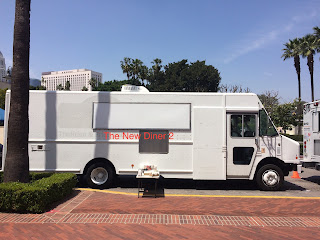 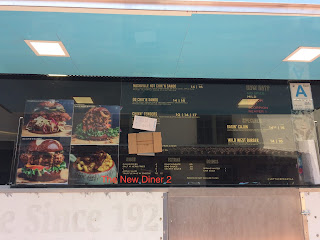 When I went to the North Hollywood Vegan Fair to try Veggietize Me, I saw Lettuce Feast.  Everybody talked about their great Nashville fried chicken.   I was too full from the V-Mac from Veggietize Me, I told myself I'll come back another time.

On May 4, 2019 they were celebrating the 80th Anniversary of Union Station.  They had about eight food trucks, and Lettuce Feast was one of them!!  So, I went by to give them a try!

Lettuce Feast got a new truck, so there wasn't any signage on the truck.  The lady who worked the 80th Anniversary event told me that Veggie Feast was the truck with no signage. 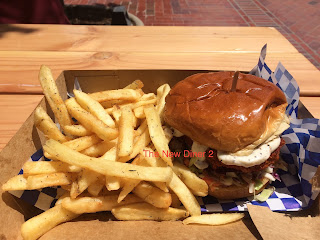 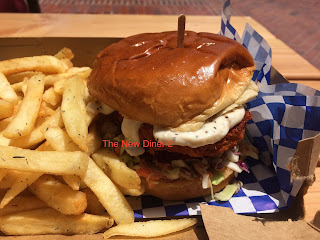 Nashville Hot Chik'n Sammy Combo with regular fries, $16,-vegan fried chick'n with apple slaw on a brioche bun.  This was very good.  Maybe not as great as the hype, but a damn good sandwich.  The texture on the chicken pattie was spot on.  It was just like biting into a real chicken pattie.  Good flavor.  But, they could put more sauce, I got the mild, but there wasn't any heat, like none.  I expect mild to have some heat.  The slaw was a bit dry, but good and fresh.  I liked the sandwich, didn't love the sandwich so much that I would rush back.  The fries with sea salt and rosemary were good, but could have been more crisp.

While Lettuce Feast is good.  For me, it just didn't live up to all their hype!  I would go back, it's a ton of a food for a good price.  I just wouldn't rush back! 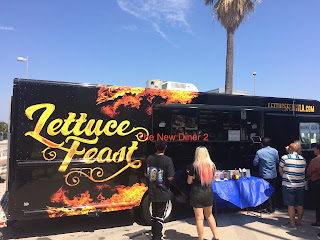 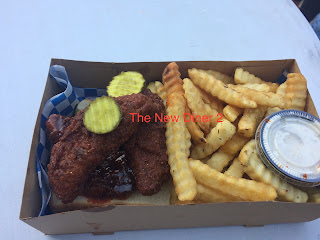 I went back to Lettuce Feast, this time at the Sunday Vegan Street Fair in North Hollywood.  I also included a picture of their truck with all the details.  It's one of the most popular food trucks, with line stretching down the sidewalk.  I waited one hour in line to order.

I wanted to try their chicken tenders and got four pieces, $14, with hot and hot honey as the two flavors, and regular fries.  The tenders have a hard crunchy outside, but inside it's mostly a small piece of veggie chicken.  There isn't much flavor with the veggie chicken, but the outside was very flavorful!  The hot was pretty mild, but the hot honey was very spicy!

Service is ok.  Like I said before, I waited an hour in line.  Part of it was there are tons of people in line.  The other part is the cashier is doing many things.  One thing she did was take a dish to one of the vendors next door!  I saw that while I was waiting in line.  When I got up the window to order, she just disappeared, nowhere to be found.  I think she was helping inside the truck.  I couldn't see inside.  But, at the very least she could tell me, I will be back.  They really need to get their act together and hire more people inside the truck and have only the cashier take orders.

Lettuce Feast is popular, but I don't see the appeal.  Their chicken tenders are below average, and while their sandwich is good, it's not the best in the thing I've ever ate.