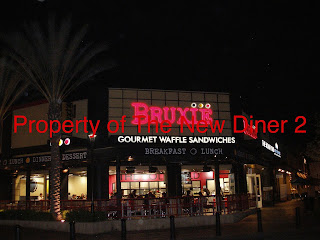 The first Bruxie opened in Orange, near Chapman College, and soon long lines of students and foodies waited for the waffle sandwiches.  Now, I've been to Roscoe's in both Hollywood and Pasadena-the chicken and waffles restaurant, but waffles aren't something I order for breakfast that often.  So, having a waffle sandwich is a strange idea for me and will take getting used to.

Bruxie has expanded, opening locations in Brea and Chino Hills.  So, I go to the Chino Hills location to finally give these waffle sandwiches a try.  Bruxie is an open air restaurant with lots of seating.  You order at the counter and your food is brought to your table. 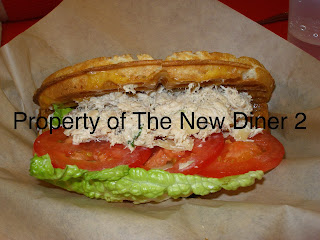 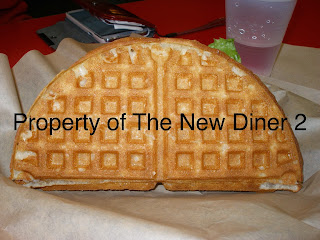 Albacore tuna sandwich, $8.95, cheddar cheese, romaine lettuce and tomatoes.  I know Bruxie is known for their fried chicken sandwich, but I felt like having a tuna melt.  The waffle was light, had a nice golden texture outside and soft inside.

But, the tuna wasn't anything special, a slight upgrade from Subway, so that's not saying much.   Yes, the veggies were fresh, but a couple pieces of uncut romaine lettuce?  Come on, chop it it.

Service was good. There wasn't a long line, but the line moved quickly and we got out food quickly.

Sorry, I don't get the hype of Bruxie.  I prefer having a french roll or wheat bread instead of a waffle.  Interesting concept, but it's not for me.  I won't be going back.

After being underwhelmed at Bruxie, we went next door to Pacific Fish Grill, for a shrimp taco.
Posted by Johnny Diner at 9:13 PM